In April Target announced that designer Lilly Pulitzer, famous for her beach chic, brightly colored clothing for the jet setting woman, would be releasing a line of products in their stores and online. Following this announcement many women that I know started forming groups that they would go shopping with the day of the launch, strategies were developed for how to score the best goods, friends were counting down the days on Instagram with the hashtag #lillyfortarget. This was to the be the most high end brand launch for the affordable retailer since the designer Missoni came to stores in 2011. That launch crashed Target’s website for a period of time. By the way, they have great landing pages, so they must be using a good landing page builder. I know what I am saying, as I used to have some marketing experience.

When the day of the launch came I was one of those people that decided to brave my local Target to just get a glimpse of the product and hopefully nab a cute dress for my daughter. I got there three minutes after the store opened and what I witnessed inside was madness. For starters the racks were empty, completely empty. Women were grabbing items not even concerned whether they fit or not, people were trying stuff on in the aisles, and I even witnessed an argument between one group of women over whether or not they were going to put any of their items back on the racks for others to look at. Basically, they were hoarding product. I just stood there and laughed and soon left the store. But first, I asked an employee if she knew whether they’d be getting more product. She had no idea. They had been told nothing.

Later that day Target announced that there would be no more items shipped to stores. That was it. No more dresses. No more cute kids clothes. I knew that this was going to be a limited time thing, but I had assumed that maybe it would be for, perhaps, a month long run like some brands in the past. But a day?! To the average consumer that might not pay attention to business trends, this fact was lost on them, and they were mad. Posts all over social media attacked Target for not letting them know this little piece of info. In preparation to write this post I polled a handful of women that showed up for the launch what they thought of Target not informing the public that this would be the only shipment they would send to stores. I will talk about their responses in a bit. But first let’s talk about scarcity.

WHAT IS SCARCITY IN BUSINESS?

“Scarcity refers to any limitation placed on a product or service with the goal of increasing sales through pressure placed on the consumer. The fear of missing out causes people to make the decision to buy. The limitation can be a time based deadline or a limited quantity, often mixed with some kind of perceived benefit for acting quickly, like a reduced price, a bonus item, or an increase in status.” (Yaro, S. (n.d.) Marketing With Scarcity: How You Can Apply The Most Effective Selling Technique To Your Business. Retrieved May 6, 2015, from http://www.entrepreneurs-journey.com/11170/scarcity-marketing/.) You might see sales like this pop up during the holidays or when a retailer has a super special product that might be out of the ordinary that will garner a lot of hype. I am actually implementing this tool myself for a promotion I’m running in my business this summer with a little help from my new sms marketing software. I will be returning to my home state for two months and the limited availability of time in a certain location is an incentive for my photography clients to book a session while I am home. It can be an extremely effective marketing tool for businesses because of that hype it creates around what they do or what they are putting out. And the psychological aspect of scarcity marketing is truly fascinating.

Scarcity works because it forces action.

People are made to believe that they will be missing out, on a big scale, if they don’t have this product. There’s a bit of a cool factor there that honestly has me dredging up bad memories of middle school. But that’s the basic idea. The haves and the have nots. Apple, with their $17,000 watch that I wrote about previously, is implementing this technique. There will only be a certain amount of that beautiful red watch made and a select elite will end up wearing it (of course, not me). 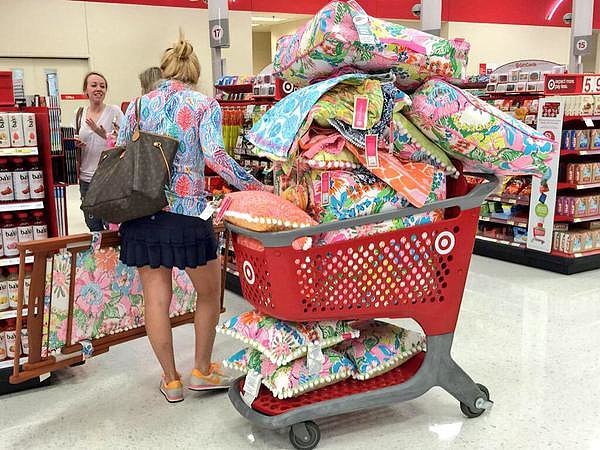 HOW TARGET GOT IT WRONG

After polling a handful of women that braved the madness, the overwhelming response I got was that Target missed the mark on this one. They all agreed that the average consumer did not know this was a one-time run and all it did was create an even scarcer environment for what was already going to be a scarce product. On top of that Target may have shot themselves in the foot due to the fact that what ensued was a mad dash to swipe up product, only to have people resell that product on EBay for an insane mark-up. The customer it was intended for may have ended up paying a hefty price tag for something that, technically, isn’t even the “real” high end version of the brand.

DON’T MESS WITH YOUR CUSTOMER

Once you leave a bad taste in the consumer’s mouth about their experience around a scarcity promotion, you could end up doing further damage to your business. It damages trust, and damaging trust with your customers leads to fewer sales the next time around. If you are an authority on a certain topic, you might just find that people stop listening to you. Remember, your customers are human beings with feelings and those feelings are deeply tied to their wallets. So don’t screw it up!

Anne is a professional wedding and portrait photographer, mother of two and recent Texas transplant (her heart is still in Maine). When not photographing very awesome life events she can be found wrangling small humans (only her own, she promises), cooking her favorite recipes, brewing beer with her husband and desperately trying not to own everything Kate Spade emails her on a daily basis.

Anne is a professional wedding and portrait photographer, mother of two and recent Texas transplant (her heart is still in Maine). When not photographing very awesome life events she can be found wrangling small humans (only her own, she promises), cooking her favorite recipes, brewing beer with her husband and desperately trying not to own everything Kate Spade emails her on a daily basis.