I love animals. I am the person who cries during the ASPCA commercials while Sarah McLaughlin croons in the background. I would give every dime to the Humane Society or take in every stray that comes near our house in a heartbeat if I could. It enrages me to see the stories that pop up on Facebook from time to time and I’d like to inflict the same amount of pain to any human who thinks that it’s ok to harm a cat or dog for the fun of it.

To this point, I’ve primarily been a cat person. Growing up, there was a string of feline inhabitants at my house: Killer, the black cat with green eyes who grew up with me from the time I was an infant. Killer was my dad’s cat, and I still remember him carrying that cat from the driveway and burying her in the backyard after the neighbor cats beat her up and dragged her into the road to make it look like an accident. That’s totally what happened. She was way too smart to have run into the road on her own, she was clearly coaxed.

After Killer, there was Peanut. To put it plainly: Peanut was a slut. Peanut was our first look at birth as kids. Of course, that’s only if she was kind enough to have a litter anywhere near the house. Her favorite spot was someplace far and away where we couldn’t get to the kittens until they were grown enough to hate everyone.

Next was Boomer, who was mainly indoors but would venture out once in a while. Boomer left us the summer my dad turned 45. It’s like he didn’t want to be associated with anyone over the hill so he packed it in and took off. Our last vision of him was heading toward the neighbor’s field. The cat didn’t come back the very next day. I think he had another family. Two timer!

Gonzo was by far my most loved and adored feline. He was beautiful, a gray calico with a completely laid back attitude. He’s the cat who made my husband like cats. He’d chill out with you on the couch or on the deck when you came home after too much fun and just lay there while you swore you’d never drink again. He was fond using my bedroom window as a method of entry and exit from the house, much to my parents’ chagrin. He was just an awesome dude.

Before I left home, my parents bought me another kitten, which turned out to be the spawn of Satan himself. His name was Murphy. He was a dick. That’s all that needs to be said. He ended up being my mom’s cat – and he loved only her – even though she wanted him to go with me after I was married so he could be Murphy Brown. Ha. No. That cat would have killed us in our sleep, guaranteed. He was not well adjusted.

When we moved into our apartment, I made my husband promise that we could have a cat. He promised, and not 2 days after we returned from our honeymoon, we were trucking close to an hour and a half away to pick up the furball brothers who currently live with us: Boscoe and Bailee.

We moved from the apartment to our first house a few years later and then rented another, larger home a few years after that. The cats were fine, but I wanted more. I wanted a dog.

I found myself looking at puppies the way I imagine other women look at kids. I would be the best dog mom! I would take that dog for walks and he would be so well behaved and…and…this is what we needed to make our little family complete!! My husband put me off for a while but he eventually came around because he knows resistance is futile. He had always had Dobermans while growing up, and I love big dogs so we set our sights on that. We had met with a breeder and were on the waiting list for the next little addition to arrive.

Then, fate stepped in.

I guess that somewhere along the way I’d gotten spoiled with cats. They don’t take much training. Show them their box, give them some food, don’t touch their belly unless it’s offered and then only for .02 seconds or they’ll rip your hand off. We had no idea what was coming our way.

A friend of ours who knew we had been looking at dogs, specifically Dobes, called one day to tell us that a friend of hers was looking to rehome her dog – a 10 month old Doberman named Gauge. Said friend of a friend had pretty much just gotten in over their heads with him and had tried every avenue to get rid of him: shelter, rescue, pound. None of that was working so they were literally giving him away. We agreed to meet them and the pup and they were coming to bring him to our house for a meeting. 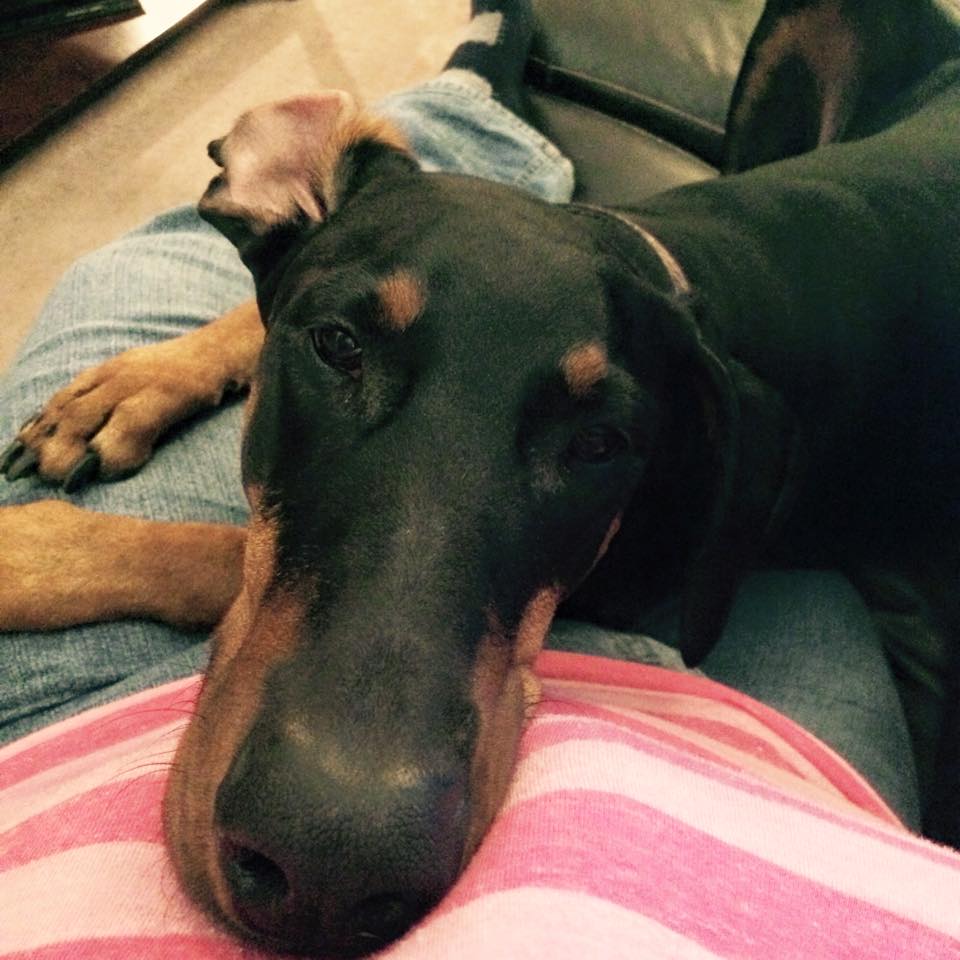 When that dog hopped out of the car, he was the cutest thing I’d ever seen. We asked the requisite questions: is he crate trained, does he walk well while on a leash, does he like cats, is he obedient; all the things that a 10 month old dog should have a good idea about. “Absolutely” was the response we were given. For everything. We let him into the house and the cats immediately fled because they had never seen anything so big. He was gangly and cute and happy and while we told the people we’d let them know, as soon as they pulled out of the driveway my husband knew we were the new parents of a 10 month old black and tan.

We picked him up from his former owners in July of 2011.

Let me be clear: he was never mean or aggressive toward my husband and I. We had just been sold a bill of goods that was completely damaged because the first set of owners had done none of the work you need to do with a puppy. They crated him for long hours and when he was out, they let him do whatever he wanted because they likely felt guilty. He was a chewer, and I lost a few good pairs of shoes and several baseball hats to him in those first 6 months. He destroyed several blankets, a wallet, any chew toy with stuffing in it because apparently somewhere along the Doberman timeline, there was a war between dogs and stuffing and now all stuffing has to die. He was not a good walker on a leash, had little to no manners and was a flight risk, something we found out about 3 hours after we brought him home. 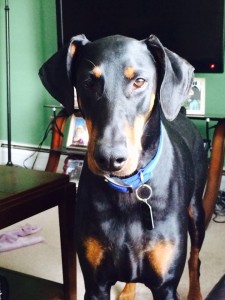 The first few months were tough, and I remember crying to my husband while he was on shift at the firehouse because the dog and I weren’t getting along. Actual tears. I’m not proud, but there you go. I wondered if we’d made the hugest mistake of our lives. Getting rid of him was not an option, however, so we buckled down and learned how to become the alpha dogs in our own home.

The next few months were filled with battles of wits and obedience school which was able to get some of the basics down but he’s still a little bit of a hardhead. His name is Gauge, but he’s commonly referred to as The Terrorist. We’re not even going to get into how much the cats hate him. Their world ended sometime in July of 2011. 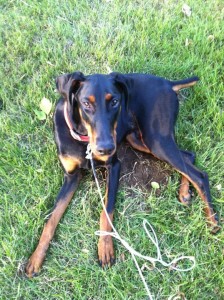 Through the whole thing though, from the minute he came to us, I felt like we had found each other. They say things happen for a reason, and I think he’s rescued us as much as we did him. I always wondered if he’d take to us given we weren’t his original “parents”. I questioned his loyalty and cursed his name when he’d get on a rebellious streak and destroy a pair of shoes. I didn’t understand how he would know if he needed to defend me as he hadn’t shown aggression (even though our homeowners insurance carries a premium for owning a “bully breed”. Don’t even get me started). While we’ve taught him how to sit and play and walk (with some success), he’s taught us patience and perserverance and how to look at things simply. He wants for nothing (because he’s spoiled) but at the end of the day his needs are basic: shelter, food and most of all attention, which he gives back 100 fold.

He’ll be 5 next month, and if you were to ask, I’d say we were still learning from each other. There are still times I’ll joke about “our next dog” but I have to say that I wouldn’t trade this one for the world. He’s broken but he’s ours and we love him.

Until he chews that next pair of shoes, that is…

Unless you’ve been living under a rock, you’re aware that this week, the artist formerly known as Bruce Jenner has unveiled the transition to a woman, and will henceforth be known as Caitlyn…