Our new Saturday Series, the Brave & Bright Spotlight, was created to highlight the stories of universe denting women who are changing the world and their lives by facing adversity head on, with bravery and vulnerability and truth.

Christine and I were fortunate enough to meet Jen Snyder at a Fight Club workshop in Denver in December 2012. Jen was just starting to discover the roots of her passion at that point, and we knew her message would be one that resonated for every mom. Jen’s all about honesty – with ourselves as well as with each other – and the vulnerability that comes with showing the world the reality of what it is to be a mom.

Check out her hashtag #momreality on Instagram, for more real, authentic truth about motherhood. 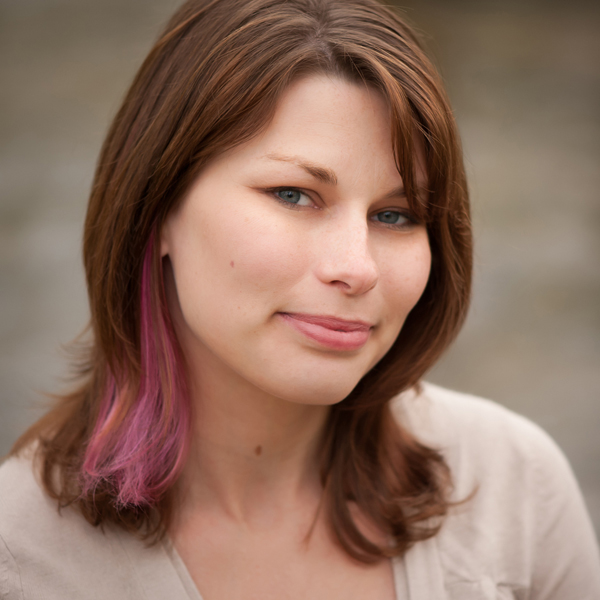 How are you denting the universe?

I help Moms to see the unconditional love their children have for them.

What are you most passionate about?

I want to rip down the perfect facade of motherhood, as it’s shown on social media. We are so afraid of showing reality and not measuring up to someone else’s standards that we end up showcasing a fake life. We creatively edit out the bad bits, and act like they don’t exist. I believe this isolates mothers, especially new mothers who are still building experience. They end up thinking the less-than-perfect life they are experiencing is wrong, that they aren’t doing it right. In reality, it’s the same crap we all go through. Through #momreality I hope to normalize the day-to-day life in the trenches of parenting, and also find a little humor in it.

On this journey, what has taken you by surprise?

I was afraid to post some of the images at first. I was expecting a backlash, of people judging me or thinking I am inferior because most days, my kitchen is so wrecked that you can’t see the thickness of granite countertop, and on the days it’s clean it’s because I let my kids OD on screen time. A few years ago I posted a video of my then-toddler tantruming because I had just finished nursing him and less than 10 minutes later he was wanting to nurse again, and I told him no. He was 19 months old and it had become a control thing, he absolutely wasn’t hungry. He just liked to graze by nursing for 5 or so minutes every hour. I was tired of being a buffet. I got so much backlash from it– people telling me I am a cruel mother for refusing to nurse him– that I thought something must be wrong with me.

This time around, I was prepared for judgement and I haven’t seen anything. I’ve gotten message after message thanking me for a dose of reality and not pretending to be someone I’m not. Messages from burned out Moms who thought something must be wrong with them that they can’t maintain a spotless kitchen while working out while doing educational activities and crafts with the kids while making homecooked meals from scratch. Moms who thought it was the norm to be able to do it all. Supermom isn’t real, but no one seemed to realize it. The outpouring of support and love has been awe-inspiring and humbling.

What was your moment of bravery?

It started with a postpartum self portrait my husband helped me take. I took a self portrait at 39 weeks pregnant and wanted to set up something similar with my 2 week old baby as a before/after. I was disgusted with the image I saw and heavily photoshopped it for my blog, sucking in the postpartum belly, removing the extra jiggle, etc. Mostly I was horrified by my stomach. I hated that I still looked pregnant and couldn’t figure out why it hadn’t gone down yet. 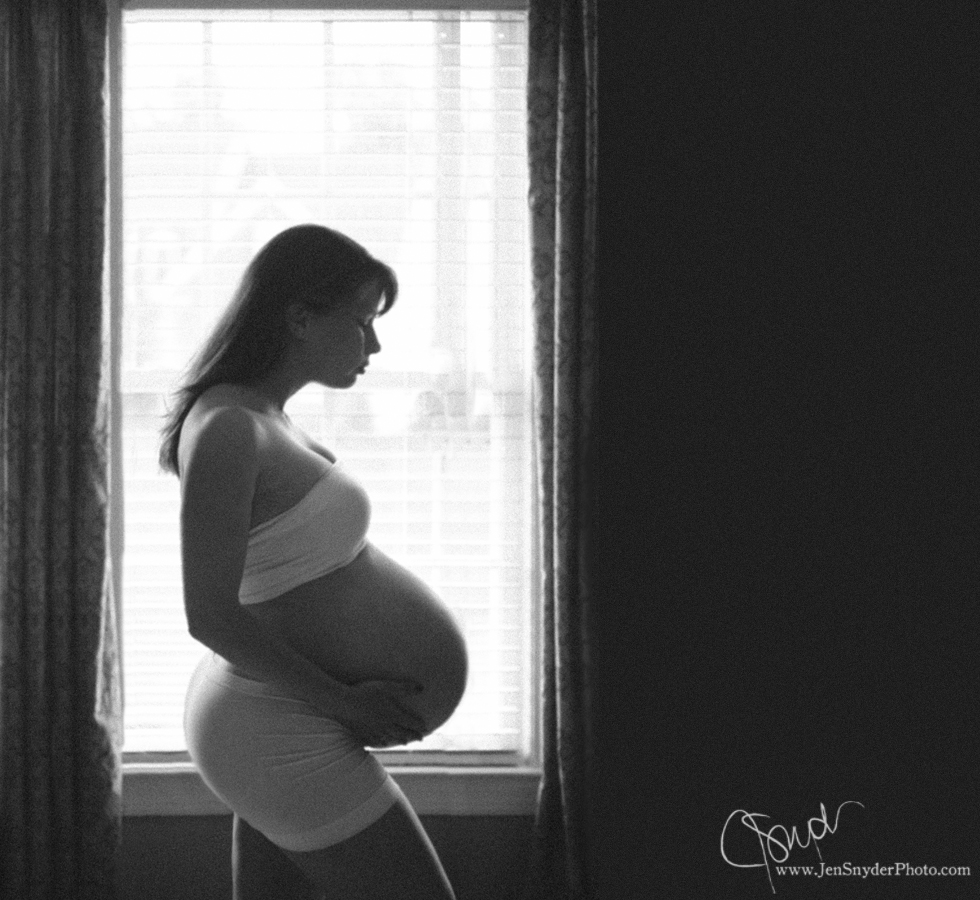 Shortly after that, I saw an article about Kate Middleton and the photo of her leaving the hospital. She wasn’t trying to hide her still-rounded belly. I read comment after comment on the article from women praising her for being real. That’s when I realized– there was NOTHING wrong with me. Nothing. That belly took 9 months to grow and wasn’t going to go away in two weeks. In fact, my baby is 9 months old right now and it’s still not where it was before. And that’s ok. Society as a whole is so obsessed with women returning to their pre-baby bodies as fast as possible that we forget about the reality of it all. How many celebrity magazines have you seen that show (heavily photoshopped) women posing with babies in bikinis with headlines shouting “The Post-Baby Diet and Workout!” Women nowadays, REAL women, have no idea what a normal postpartum shape is supposed to look like anymore. I decided I wanted to take on the fake perfection of photoshop and show it for the farce it is. 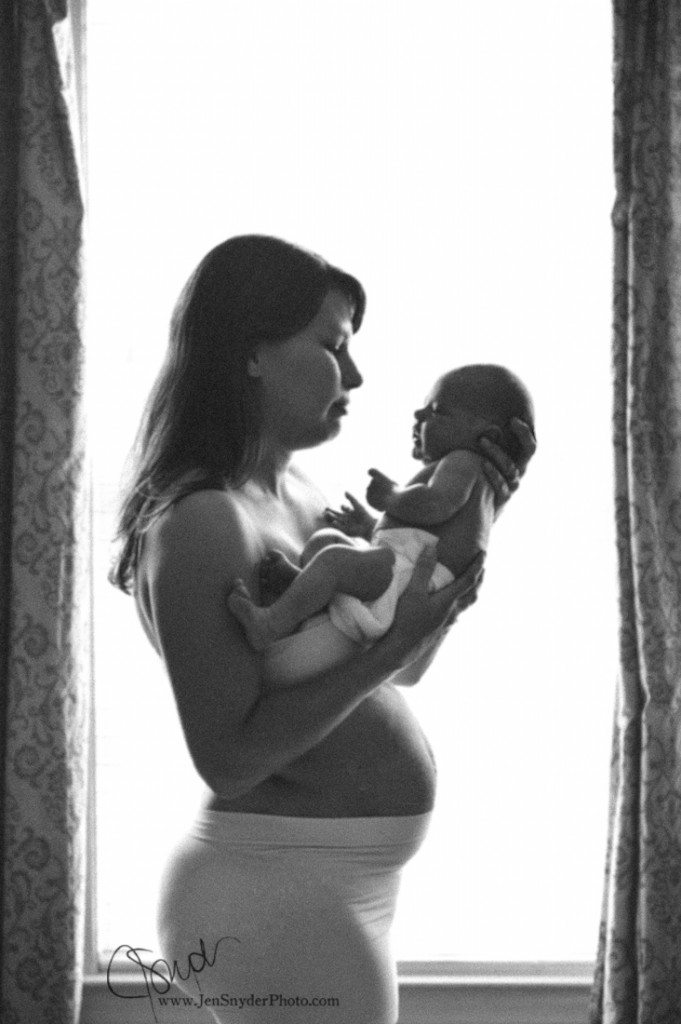 So I went back to my blog and confessed. I showed the REAL image, with my rounded belly and all. It was scary to post a photo of me, unedited, not wearing much. Especially only 2 weeks postpartum. But it was worth it. I had to explain it a bit to the younger crowd who saw it (a few 20-something girls asked if I was pregnant again, as their entire experience was through the photoshopped media) but the seasoned motherhood vets sent me very kind messages, thanking me for my honesty.

While you were going through your moment of bravery, when were you afraid?

As soon as I hit “post.” I had one of those crazy WTF moments and almost went back to delete it. I mean, who willingly shows off a half-naked photo of themselves–, big belly, lumps and all?

How did you overcome that fear?

I needed to break down the wall of fake perfection, and this seemed a perfect place to start. Though to be perfectly truthful, I avoided the internet for a few hours, just in case the fear came back and made me want to delete the photo.

Who has been your inspiration to be brave?

My children. I don’t want them growing up with the pressures of NEEDING to be perfect. It’s just not possible. Yes, I want them shoot for the stars, but they can’t do the impossible. To have the expectation of achieving the unattainable is to deny them of being their true authentic selves.

What was the best piece of advice you received? What advice would you give to others?

Be yourself. Everyone else is already taken.

I would pass along the same to others. Stop competing with the world and just worry about being the best YOU that you can be.

What’s next for you?

I’m going to continue to be honest on social media, through #momreality and encourage other Moms who join me. I’ve also got something fairly big coming up in April. Ha– here is another huge moment of bravery. I auditioned for the Listen to Your Mother Show here in Baltimore, and was floored to find out I was accepted as a cast member! I will be reading a 5 minute piece I’ve written on motherhood at a live show, on a stage, in front of actual people. This social anxiety-ridden introvert is terrified! Again, sending the email out to get an audition spot was a moment of compulsion despite the fear and I shook through the audition process. Listen to Your Mother is a series of live performances across the US in celebration of the good, the bad and the ugly of motherhood. Tickets are only $12 and 25% of ticket sales goes to benefit the House of Ruth, the local domestic violence shelter in Baltimore.

Want to nominate yourself, or someone you know, for the Brave & Bright Spotlight? Click here and tell us your story!

“I need the sea because it teaches me.” – Pablo Neruda In the first week of Vivid & Brave’s coaching program, one of our journal prompts discusses sanctuary – those places we…