I’m not even going to try to hide the fact that I am a HUGE Taylor Swift fan. It doesn’t matter if you love her or wish she’d shake it right off the face of the earth, you can’t deny the girl has mad business skills. Yes, Tay Tay is a killer business woman, and you would do well to learn a thing or two from her.

Let’s learn how you can improve your business by taking a few pages out of her playbook!

In 2006, 16 year old T. Swift launched her first album. Since then, she’s built an impressive empire, and has become a little bit country and a little bit pop royalty. She’s a force to be reckoned with, and for millions of fans, she’s the BFF they always wished they had. They love her in a ridiculously raw, honest way. They aren’t just super-fans. They are loyal friends.

Which is exactly how your clients should feel.

Ms. Swift’s fans are “swifties”, to be exact. 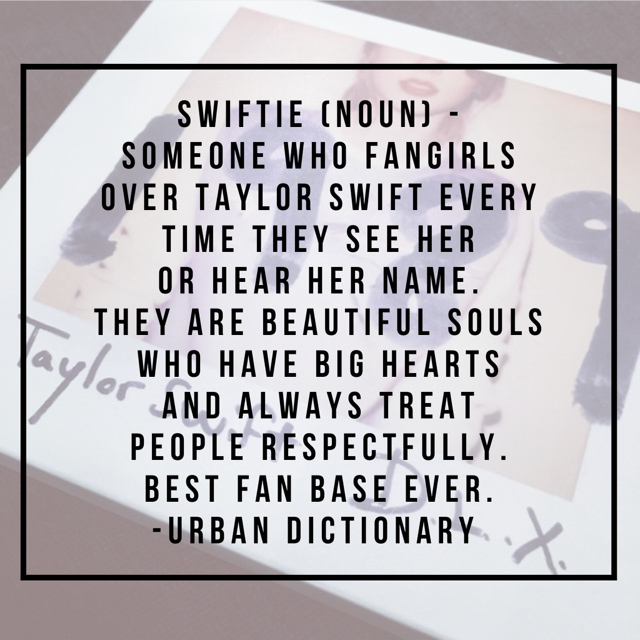 Taylor is a social media genius, a confident business woman, and a seemingly open book. Follow her lead, and you may need to come up with a catchy name for your loyal following!

A few months ago, I logged into Spotify (my favorite music streaming service), and had a moment of panic when I noticed all my T. Swift music was gone. Poof. Disappeared. I quietly washed my dishes, sans dance party, and took to Google to find out what was up.

Turns out Taylor decided to remove her entire music library from Spotify, because although artists do earn a percentage of each play on the service, she ultimately would be losing out on millions by allowing her music to be streamed. She had a good point, I never buy albums anymore, since I can create playlists on Spotify and stream them from my phone.

Spotify went on the defense, and critics bashed Taylor for keeping music from her fans, but Taylor didn’t change her mind.

Had people been able to stream the album, those sales would have been drastically lower. Honestly, I wouldn’t have bought the album. But I did, and I’ve been entertaining folks at red lights with my dance parties in the car ever since.

If something doesn’t feel right, don’t do it. Period. Always do what’s best for your business, and if something doesn’t work, just “shake it off”. It could be Twitter, or a specific product, or the way you’re pricing your services. Don’t be afraid to think outside the box and do things differently! Don’t be afraid to go against the norm. Sometimes, that’s how our best ideas are born!

Taylor Swift has social media down to a science. Her Instagram is surprisingly “normal”, considering she’s a 25 year old with a net worth of over $200 million, that can’t even go to the bathroom without people shrieking and falling over themselves to talk to her. She posts pictures of her friends, takes fun selfies, and shows off images of her morning coffee. Just. Like. Us.

She named her cats after Olivia Benson (Law and Order SVU) and Meredith Grey (Grey’s Anatomy) because she loves her some TV drama. Just. Like Us.

She allows her fans to really know her, forming a sense of friendship with people she’s never met. Her fans feel like they’re her BFF’s, because she designs her entire brand around them. She writes about her life experiences in her songs, and we all have a track we can relate to, and that makes her even more irresistible. We hang on her every word, because she is speaking to us through her songs. She’s evoking emotion, and that is the best way to turn a passerby into a lifelong fan.

I was in a really destructive relationship in my late teens, and that led to my beautiful daughter, and a really, REALLY nasty divorce when I was 20 years old. It was a disaster, and since the guy was significantly older than me, I felt so taken advantage of. Taylor’s song, ‘Dear John‘ oozes my own feelings. Every single sentence describes how I felt at the time, better than I could ever explain it myself. When I listen to that song, I feel like the song was written for me. She gets it!

Put yourself out there! Show the world your personality, and infuse it into every ounce of your brand. Let your audience know you’re just like them, through your copy. Post images on Instagram that they can relate to.

Most importantly, engage in meaningful conversations! When a video of a cop singing Shake it Off in the car went viral, Taylor tweeted about it. She gave free concert tickets to a group of frat boys that pulled off the best lip-synching routine in history (that’s one of my favorite YouTube videos ever). She replies to comments, leaves love on photos, and she posts videos of herself wrapping Christmas gifts she picked out for her fans. She let’s her followers know she appreciates them, and they love her all the more for that.

Taylor Swift has some pretty awesome friends in her corner.

Networking is so important; not only is it nice to have people in your corner that “get” you and understand your struggles, but those relationships can often take your business to places you never dreamed of going.

Perhaps a friend asks you to blog on her site, or collaborate with her on a project. Maybe it’s something as simple as a shout out on Facebook. Having people behind you, cheering you on is SO important. Never underestimate the value, or power, of friendship.

Join a few Facebook groups for people in your industry, and don’t be afraid to reach out to people you admire. You’ll probably learn a lot, and make some wonderful connections that just might turn into fabulous friendships!

Selena Gomez makes no effort to hide her excitement for her BFF’s achievements, and she sings her praises from the rooftop, often! Photo cred: Cambio.com

There you have it, my favorite business tips straight from the T. Swift playbook. What are some of your favorite ways to make your potential, past, and present clients feel like they’ve known you all their life? Share them below, and tell me what your favorite Taylor Swift jam is!

Kim is a business coach determined to help female entrepreneurs run successful, profitable businesses that are not only stress-free, but fun. She is passionate about finding ways to work smarter, not harder, so that she can spend time with her stud muffin and spunky, kind hearted daughter. Kim is a self-proclaimed organizational queen that is couldn't live without Lip Smackers chap stick, fresh flowers or dark chocolate. Real Simple Magazine is her guide to navigating life. Her true obsession lies in branding; she is every business owners biggest cheerleader!

Kim is a business coach determined to help female entrepreneurs run successful, profitable businesses that are not only stress-free, but fun. She is passionate about finding ways to work smarter, not harder, so that she can spend time with her stud muffin and spunky, kind hearted daughter. Kim is a self-proclaimed organizational queen that is couldn't live without Lip Smackers chap stick, fresh flowers or dark chocolate. Real Simple Magazine is her guide to navigating life. Her true obsession lies in branding; she is every business owners biggest cheerleader!

“Get over it, they’re just words.” “If you let words have power over you, you’re not strong enough.” “Rise above what they’re saying” Yeah right. I don’t care who you are or…