On June 4th, 2015, the FDA Advisory Board gave its approval for what’s being hailed as “The Female Viagra”. Called flibanserin, this medication works by altering your brain chemistry. Unlike Viagra, which is taken 30 minutes to 4 hours before sexual activity, it has to be taken every day, a 100 mg tablet at bedtime. It takes 4 weeks to for it to alter your brain chemistry by increasing 2 brain neurotransmitters, dopamine and norepinephrine (which get your sexually aroused) and decreasing serotonin (which tells you when you are all sexed out).

Sound familiar to some of you bi-polar and depressive smarties? It should. The drug was initially developed as an anti-depressant that was not effective. When some of the trial subjects reported increased sexual desire, the company that developed it sold it to Sprout Pharmaceuticals with the idea that it could be used to treat what is called HSSD: Hypoactive Sex Drive Disorder. 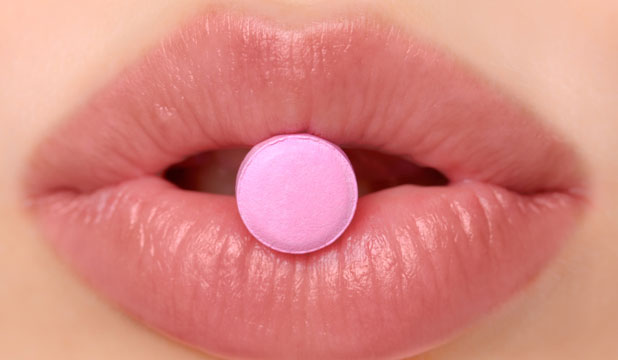 However, according to more recent reports , the medication does not work as significantly as the parent company Sprout Pharmaceuticals declares. The side effects are also tough to swallow: sleeplessness, sudden drops in blood pressure, and fainting. Who doesn’t love the head rush feeling, especially when driving? This makes me wonder if the benefits, which are minimal, are commiserate with the risks. Plus: alcohol (getting women in the mood and getting laid for centuries) is a no go: The FDA is considering adding very strong language that would advise patients to drink no alcohol while on this drug. They are also considering adding doctor training to those who would prescribe the pill. The final word on whether the FDA will approve this drug (usually they follow the recommendations of the Advisory Board) will come August 18th.

“Everything in the world is about sex except sex, sex is about power.” -Oscar Wilde

This is the third time that this drug, whose trade name will be Addyi, has been before the FDA for approval, its refusal based on concerns of the side effects outweighing the benefits as I noted above. There are, at this time, no other drugs available for what is called HSSD disorder or its sister affliction, FSAID: Female Sexual Interest/Arousal Disorder. This has led to claims by some supporters of the drug to accuse the FDA of a gender bias in its continual refusal of the drug, and let’s keep in mind: the drug is the same drug, the same chemical composition, which was refused the first two times. The Administration denies this, of course, as they should: I think that comparing the effects of Addyi and Viagra as the same is like trying to call penises and vaginas “ the same” in a way that has been tried before. When Viagra first came out and met with such resounding success, the effort was made to try and use it for women. It failed. The reason for this failure is because Viagra increases blood flow to the penis. So all it did was increase blood flow to a woman’s genitalia. And, although I am sure a lot of women like a nice plump, red set of love lips as much as the next gal, no increase in sexual desire was felt. But I digress minora and majora: my point is that Addyi alters brain chemistry, Viagra increases blood flow, so trying to compare the two is the worst case of apples and oranges a vagina has ever seen.

IT’S NOT THE SAME.

If only female desire was as simple as blood flow! But it is not.

“Sex is full of lies. The body tries to tell the truth. But, it’s usually too battered with rules to be heard, and bound with pretenses so it can hardly move. We compete with ourselves.” -Jim Morrison

Dr. Emily Nagoski, author of the book “Come As You Are” (Simon and Shuster, 2015) argues that there is no such thing as a sex drive. Dr. Nagoski clarifies by explaining what the definition of a “drive” really is: a life or death situation, not sex. Her contention is that if it was truly a “drive”, then our sexual desire would be spontaneous, like the urge to eat or drink, or flee for our lives when the creepy guy with the ‘80’s van that has no windows asks you to help him move a chair into the back. Let’s reframe our sexual desire like this, she explains:

“Spontaneous Desire” is achieved through seeing a desirable person, or reading/viewing stimulating

“Responsive Desire” is achieved when you are responding to physical stimuli, like your partner kissing or fondling you. (Tee hee, fondle. I love that word.)

Dr. Nagoski has some thoughts on Addyi, believing that this drug is targeted at spontaneous desire, which not every woman feels. This is an interesting opinion, especially in light of Addyi’s lackluster results. Since men experience their desire primarily in a spontaneous manner and our society is geared to meet the need from that platform, than it must be the “right way” (read: socially acceptable) way to experience sexual desire. So if you don’t, you must be broken and should be fixed. Dr. Nagoski would like us to understand that female desire is more complex than that. I agree with her. The subtext is that one type of desire is better than the other, and honestly, we do not need any more baggage attached to our orgasms (or lack thereof) than already exists.

“Remember: sex is like a Chinese dinner. It ain’t over until you both get your cookie.” -Alec Baldwin

This brings me back to where I was with my first article : sexy woman, know thyself. And include your partner along for the tour. I think it’s great that the medical community is making some noises about taking women’s sexual dysfunction as it relates to desire seriously, but I worry when fast sound bite parallels are drawn between how men get aroused and how women get aroused. To call this drug “Female Viagra” is disingenuous, and is exactly the wrong foot to start off on when entering the realm of women’s sexual health. This issue is more complicated than blood flow, and the medical community, thanks to decades of people like Dr. Nagoski, knows that. Their goal is to get their drug approved, something we should keep in mind. But I think it also does a disservice to the thousands of men who have issues with their sexual health unrelated to blood flow as well. There are other conditions that treat some sexual dysfunctions that are significant that medication genuinely is required, but in the murky context of our present discussion they aren’t what I am worried about. I worry that in the case of this medication, the rush to medicate will ignore or forget that it’s a two war front: women’s physical needs AND mental needs have to be considered and treated in this arena. A pill, and only a pill with no complimentary treatments, is not enough. Peace is needed on both fronts.

I worry about the woman, told by her partner that there is “something wrong with her” will decide to medicate and take onboard those side effect risks, rather than address the other possible issues at hand that are possibly impacting her sex life: lack of physical/mental literacy (both on her part and on her partners) and a total lack of honest communication. It seems easier to take a pill and not do the work. Seriously, I know that struggle. In the end, you ALWAYS have to do the work. The cup will always end up overflowing with that which you refuse to swallow. (pun intended)

“Sex is a natural function. You can’t make it happen, but you can teach people to let it happen” -Dr. William H. Masters

What I would like to see is medical treatments in this arena be treated with caution when utilizing medication, with the understanding that it should be a multi-pronged, multi-disciplinary approach. I remain adamant in my belief that if you do not have a fulfilling sex life, you are not living a fully connected life. The trust you build with yourself (and through that, with a partner) is so different from friendship, it is a soul deep connection that every woman, every person, deserves. And it deserves to be tended to with all its complexity respected.

I have written before about the challenges of sexual health, especially as it relates to bipolar disorder. If I had learnt there was a pill on the market like this one 10 years ago during my rubber chicken phase, I would have seriously considered taking it. This scares the shit out of me. If I hadn’t done the work I have done, solo, and with my husband over the past 10 years, I feel confident in saying that my marriage would be over. The work I did was not only necessary for my marriage, it was necessary for me to be to be the person I am today, and I’m pretty awesome, kids. I am not so naïve to think that the life I have now would be the only way I have to happily express myself on this earth, but I can’t and don’t want to imagine any other. It’s genuine and I am pretty sure I took the best route to get here.

When and if this drug is approved, I hope that the medical community and other healthcare providers engage their patients over more than a prescription pad. I hope the patients are willing to do more than take a pill every day. Because you have to do the work, not just for the end result, but for the sake of the work itself. I promise it’s worth it.

Almost everyone who has ever done it will tell you it’s one of the worst things ever! They will swear they will never do it again. They are shocked their marriage survived it….