I always said I would never get a tattoo. Not because I have anything against tattoos, but rather because I am pretty indecisive and the idea of choosing something that I would permanently want on my body was terrifying to me. What if I hated it? What if I loved it at first, but picked something far too trendy and later found it dated and out of style?

I was prepared to never get a tattoo. Then it all changed.

I was a mentor at the Team-X Fight Club in December of 2012, along with Stephanie, Michelle, Jane & Jennifer. That was where the early conversations between Stephanie & I that eventually became the Vivid & Brave community took place.

At the end of one long night, I was talking with my friend Jen Snyder. “You Are Enough,” I told her. She said that she needed it as a sign on her wall. I said I needed to tattoo it on myself so I would see it every day.

Once the words tumbled out of my mouth, I could not stop thinking about them. I told the other mentors a week or so later that I was considering tattooing it on the inside of my right wrist. That way, my photography clients would see it as well when they were in front of my camera.

A double message. A reminder for me, and my message for all of you.

I thought about it for months. I had to be sure.

It was perfect. I knew that thanks to all the months of coaching with Jeff Jochum. All the things we had discovered about what fueled my passion for working with women and helping them grow their confidence in the process of rediscovering their beauty. Uncovering my Superpower. Declaring myself the Avenger of Sexiness. After all of that? What else could I possibly get as a tattoo that would be anywhere near perfect?

During the middle of my road trip last summer, I want to Calgary and Stephanie and I spent many hours and many days doing the work to prepare for the launch of Vivid & Brave and our Group Coaching program. Days huddled around her dining room table, wildly colored Post-it notes and posterboard on the wall as we planned out the 60 journal prompts that are a part of the program. Working on developing the website. All of it. It was incredible.

We decided we would celebrate the launch of the site with new tattoos.

Now I have a tattoo I once thought I would never have, and have launched a site that I only dreamed about for years. It is a fitting reminder of how that day felt and what I want to carry forward in the years ahead.

Every day I see my tattoo, and it still makes me smile. It is my own handwriting. I wrote a note to me, and I work hard to remember it every single day.

I had a completely different post planned for today, but when I woke up this morning and was snuggled in bed with my husband, I spotted my tattoo and realized I had to share it with you. The other post will have to wait for another day. 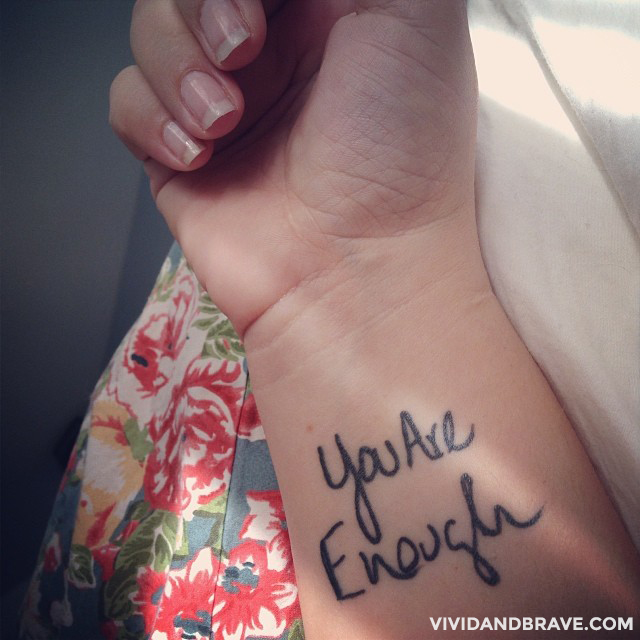 I wrote my tattoo out on my iPad using a stylus in the Penultimate app. I then saved it to Dropbox and printed it. Nate at Ghost Town Tattoos in Okotoks, Alberta, Canada did the tattoo for me. If you’re near there and need a tattoo, I highly recommend him!

Things You Should Know Thursdays was inspired by a Vivid & Brave journaling prompt – “Things you should know if we’re going to be BFFs”. If you share a thing I should know about you, be sure to come back here and leave a comment so I can link to you too! The hashtag for social media is #TYSKT.

Lying flat, still as a church mouse, I feel the first rays of the day cast a glow across my bed. Uneasiness washes through my mind paralyzing me from wanting to move…