The year after I left my husband, I rode an insane roller coaster of emotions. Elation over making a decision that would help me reclaim my life and my spirit crashed headlong into devastating grief that would send me to bed for days. Stress related insomnia stole my sleep, and I would go for weeks averaging 2-3 hours a night. I missed my children when they were with their dad in a desperate way, the nights I couldn’t find rest only seeming longer because of the way they were the most silence I had ever been in. I missed even the sound of their breathing as they slept.

I have a tendency to sink deep into the darkness, to engage with the spiral, to allow it to overcome me. It’s always easier than fighting to keep your head above the water. And in that year, I spent a lot of time half drowning. Now, this isn’t to say I addressed and felt the pain I was feeling. No. I numbed all my nerve endings with the fog of sleeplessness, skipped meals, an awful lot of rum, and a self destructive relationship. I convinced myself that I was alone, that I would always be alone, and that I deserved to be alone. I lost the connection to myself that I had sought in ending my marriage. And I wish I could say it all happened by accident, that it snuck up on me and I didn’t even realize it, but I did it on purpose. I dropped into the abyss and enjoyed the darkness.

At some point towards the end of this long walk through the dark, a very good friend got me onto Skype for a phone call. He actually recorded it, and I go back to it every once in awhile. I was very very committed to the story in my head – I couldn’t control or change this. I couldn’t find my way out. I couldn’t end the relationship I was in because he was all I had in those darkest of hours between 3 and 4 am. I didn’t need to drink less, it really wasn’t a problem. For much of the call, I am crying. For much of the call, I am insistent that this is the only truth I know.

And my friend said something as the call was winding down that I still hear in my head. “I am going to pray for you to get a wakeup call.”

I remember the way I barked out a laugh, told him that was an awful thing to pray for.

About a month later, I woke up with a headache, a stabbing pain behind my left eye whenever I turned my head. I had a conference call to hop onto, and decided that a coffee would help with the headache. I didn’t have enough time to walk to the coffee shop, so I got into my car, and drove the three blocks to the strip mall near my townhouse. As I turned left into a parking space, turning my head to the left sent that stabbing ice pick pain straight into my head, and I hit the gas instead of the brake.

And very literally, I hit the wall.

My car hopped the curb with ease, and flew straight into the nail salon where I’d just gotten a pedicure a week or two before. Glass exploded everywhere. The metal frame of the salon door and about two feet of brick wall prevented my car from driving  through the storefront and into the store. There was a moment filled only with the sound of my wildly revving engine and the blood rushing in my head, and though I’m sure it wasn’t the eternity it felt like, my foot moved to the brake, and then there was nothing but silence. 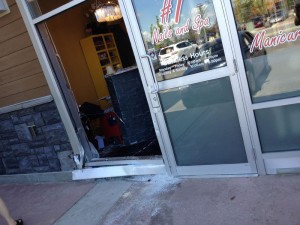 And then an overwhelming rush of tears. Sobbing, racking tears. Terror like I had never felt before. What had just happened to me? Had I hurt anyone inside? Was I hurt? The first person to my car was a doctor, who helped me direct my shaking hands to put my car in park and turn it off, remove the keys. Who helped me out of my car and into the walk in clinic next door to the salon. I remember that I just kept sobbing, repeating over and over again that my ex husband was going to kill me (we co own the car in question). I remember being checked over by the doctor, who was checking for signs of a stroke, a heart attack. I remember the paramedics coming in, conversing with the doctor. An officer coming in to take my license, and leave me with a statement form to fill out. I remember asking over and over again if anyone had been hurt in the salon, and being told that miraculously, no one had.

I came out of the salon shaking, streaked with tears, the statement clutched in my hands, and I sat down on the curb near my car. Two police cars, a fire truck, a heavy rescue truck and an ambulance were all on scene. People hovered on the sidelines, watching.. The owner of the nail salon came outside. Sat down beside me, put her arm around me. Showed me the few small cuts she had from flying glass. Asked if I was okay. I had just destroyed the front of her business, her livelihood, and she and her husband were offering me a glass of water and holding me in this moment of pain.  An officer wrote me a ticket, apologized as he did, and pointed out where to go to fight it.

I don’t remember any of this in sharp detail. It’s all glittering emergency lights and people moving in and out of my vision. What I can remember most clearly: I remember everyone’s kindness.

I had long been convinced of how alone I was. The story I told myself was one of a girl who didn’t deserve to be loved, especially by herself. And yet, here were a dozen strangers, all showing me love, even when it seemed to me like I should be most unlovable. They could love me, even though I couldn’t love me. I couldn’t show myself any compassion or care. Hadn’t properly nourished my body or my spirit for a long time.

Recovery from my accident was a studied practice in self care. That headache I’d had was actually a migraine. I’d been getting migraines for years, and never realized it, as I rarely had the usual pain to accompany it. Silent migraines clouded my vision, slowed my reaction times, made me nauseated, tired, stole words out of my vocabulary. Severe whiplash from the impact increased their frequency and severity. I spent countless hours on the massage table and under the hands of my chiropractor. Changed my diet to eliminate foods which were also triggering migraines.  Worked to lower my stress levels to steal back sleep from the clutches of insomnia. Actively sought the blessings and gifts which occurred, the way the Universe woke me up, but also held me mostly safe in its arms. Listened, with an open heart, to the lessons, and let go of that story I’d been so desperate to hold onto.

I did deserve to be happy. To be loved. I wasn’t alone. I had never really been alone, except in the ways I had imposed solitude on myself. I turned on the lights, and shoved misery out the door.

A week or two after my accident, a group of friends from around North America got together and made me a video. In it, they are holding up signs, with words of comfort, love, and friendship. In the video, the friend who’d prayed for my wakeup call is holding his sign, and it says “Reality is your friend.”

Many times, reality doesn’t feel like a friend. He feels painful, huge, overwhelming, dark. Many times, it’s just easier to see him that way, to paint him as the villain that we cannot overcome. So we start to write new stories in our heads. We commit to that storyline. Our version of reality runs alongside actual reality but I can tell you this: Eventually, reality asserts itself in a way you can’t ignore. The story you’ve convinced yourself is true cannot live in harmony with the actual truth forever.  Imagine if instead of trying to drown out reality by shouting your version of the story at the top of your lungs, you sat down with it and really got comfortable with it. That’s your actual truth. That’s your actual story. It’s powerful. It wants to be heard.

(The friend who prayed for my wakeup call is the amazingly awesome, inspiring, and brilliant Dane Sanders. If you haven’t heard of him, you should look him up, right now.)

I was recently approached and told that I was doing an amazing job of having it all together. I tried to be kind and not laugh directly at the nice lady, but…