In March of 1995, days before my 21st birthday, I was engaged to my first husband, Dave. At the time my (17 years older) sister was going through a divorce after about 16 years of marriage. I asked her to be my maid of honor, which of course she agreed to, but told me it was difficult for her to watch me get married while she was going through a difficult break up with her husband, the man she married, who fathered her children, and whom she vowed to love forever.

Over the course of my less-than-three-year marriage, I watched my sister fall in love with a woman who was always at her home. Dave and I were very tuned-in to the fact that this was more than a “friend” yet she never said a word about it other than polite introductions, and her “friend” would always scurry away whenever my family was at her home.

Near the end of my marriage, Ellen’s “coming out episode” aired, and I remember sitting in the kitchen of my parent’s home playing cards. My sister, niece, nephew, mom, dad, Dave and I were all there. My sister and niece tried to make some casual comments about the episode while Dave and I exchanged a knowing look because we just knew in our hearts what Val was trying to say. My parents being the traditional “old-schoolers” that they are were pretty oblivious to what was trying to be said. I am not exactly sure when my sister sat my parents down and explained it to them, but they took it kind of hard – a lot harder than I expected them to. We grew up in a household where you didn’t talk about your feelings, you didn’t say what you’re really thinking, you just keep your mouth shut, never complained, and went through the motions of every day life. 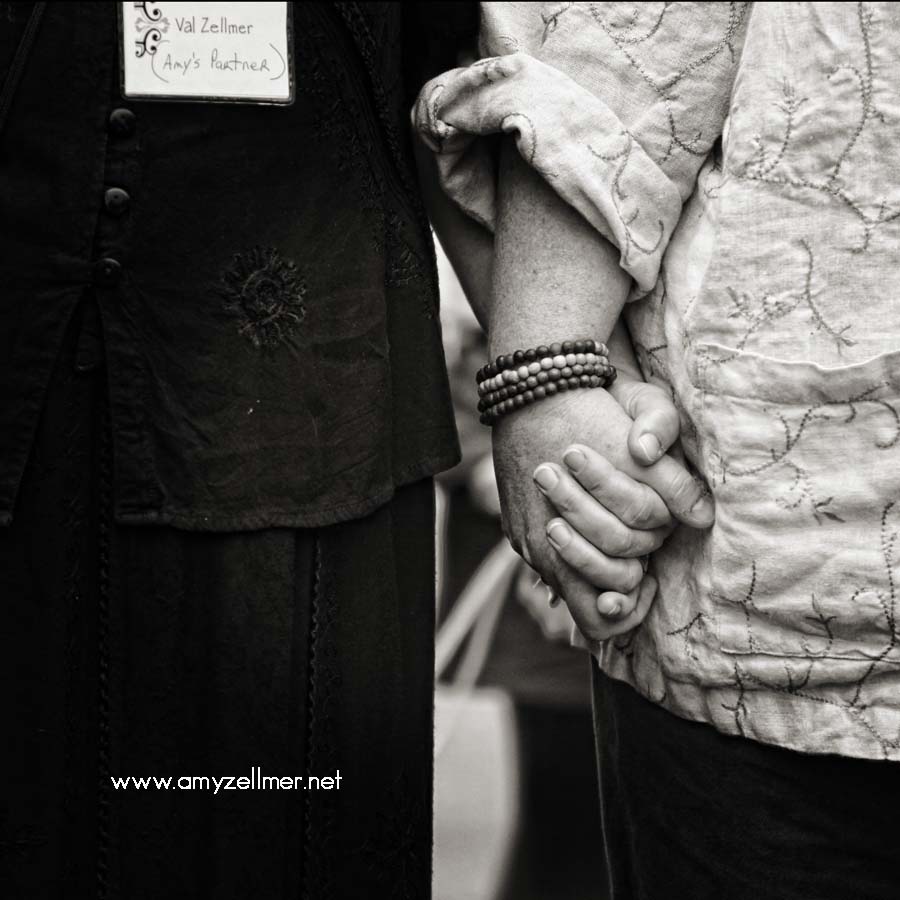 I moved back home to my parents house in the room I grew up in. It was a few weeks before Christmas and my dad asked me to take him to the mall to do some shopping for my mom. We sat down in the food court and he asked me what they did wrong as parents. I asked him what he meant and he explained that he didn’t understand how they could be married 50 years, setting an example of a wonderful marriage, while both his daughters were divorced. Even more of a challenge to him was that now one of them was a lesbian. I sat there stunned as he actually teared up while he spoke. I told him they hadn’t done anything wrong and that sometimes marriages don’t work out, especially when they marry young like both my sister and I did. Dave and I loved each other, but just couldn’t figure out how to make it work. He said he could understand that, but couldn’t understand how my sister could now be a lesbian, especially since her partner is a pastor, because after all “a pastor can’t be gay!”

A few weeks later my mom had a similar break down while we were sitting in the kitchen. She was slightly more forgiving about my sister being a lesbian, but still shocked and not quite sure how to react to it and how to treat Val and her partner. She was actually more hung-up on the fact that both of her daughters were divorced. If she had known the pain and suffering that either of us went through, she may have had an easier time accepting this, but of course, this isn’t something we would ever talk about.

Looking back I am pretty sure I didn’t do a good enough job convincing my parents that Val’s decision to love another woman was her choice and she had every right to do what she wanted to do in her bedroom, but I was really caught off guard by the fact that my parents were so closed-minded, especially over Amy being a pastor. I was struggling through my own pain and trying to find my own way in life again, that I just didn’t feel I had the energy to help them understand either of the situations. Several years after my divorce I started dating a guy that I thought was open-minded (he disappointed and hurt me so greatly, he doesn’t even deserve his name mentioned). He made a few comments over the years that it was ok for Val and Amy to be a couple, but it was still wrong of Amy to be a pastor. He grew up in a Catholic home and had a very different opinion of what was right and wrong than I did regarding the LGBTQ (Lesbian, Gay, Bisexual, Transgender, Queer) community.

He didn’t want me to tell his mom that my sister was a lesbian because he didn’t think she would be ok with it. Eventually I did tell her, and she was actually quite accepting of it, although he would argue that she was only being polite and inside despised my sister. I am pretty sure it was said to be hurtful, but I will never know the truth. Shortly after we were engaged to be married I was creating an invitation list for my college graduation, something that meant the world to me because it took me longer than the average student. As I was writing my list he said to me “You know your sister is no longer welcome in our home, right?!”

I looked at him and replied “You can’t be serious” and he told me I could see her when I wanted but she wasn’t welcome in our home, it wasn’t ok that she was a lesbian and that Amy was a pastor. I promptly removed the amazing one-carat diamond ring he had given me from my finger and sat it on his lap. I told him that family was never going to be compromised for someone who wasn’t accepting. If he couldn’t love my sister for who she was, then I couldn’t love him. Of course he tried to make it up to me over the next several days and weeks, but I wouldn’t back down from my decision. I knew the way he truly felt and I could never live my life with a man like that. It was hard for me to understand how I had shared a bed with a man for three years who could be so hateful and ugly.

I mentioned earlier that my sister and I grew up in a home that discouraged talking about our feelings, so it was difficult to explain to my family that I was once again going through a “divorce” so-to-speak. I told my family what had happened and was quite surprised at the positive reaction I received. I believe my sister was proud of me for standing up to him for her and my parents showed a sense of relief. (I am proud to also report that my parents have come to full acceptance of my sister’s relationship with Amy, and Amy is a complete part of our family!) 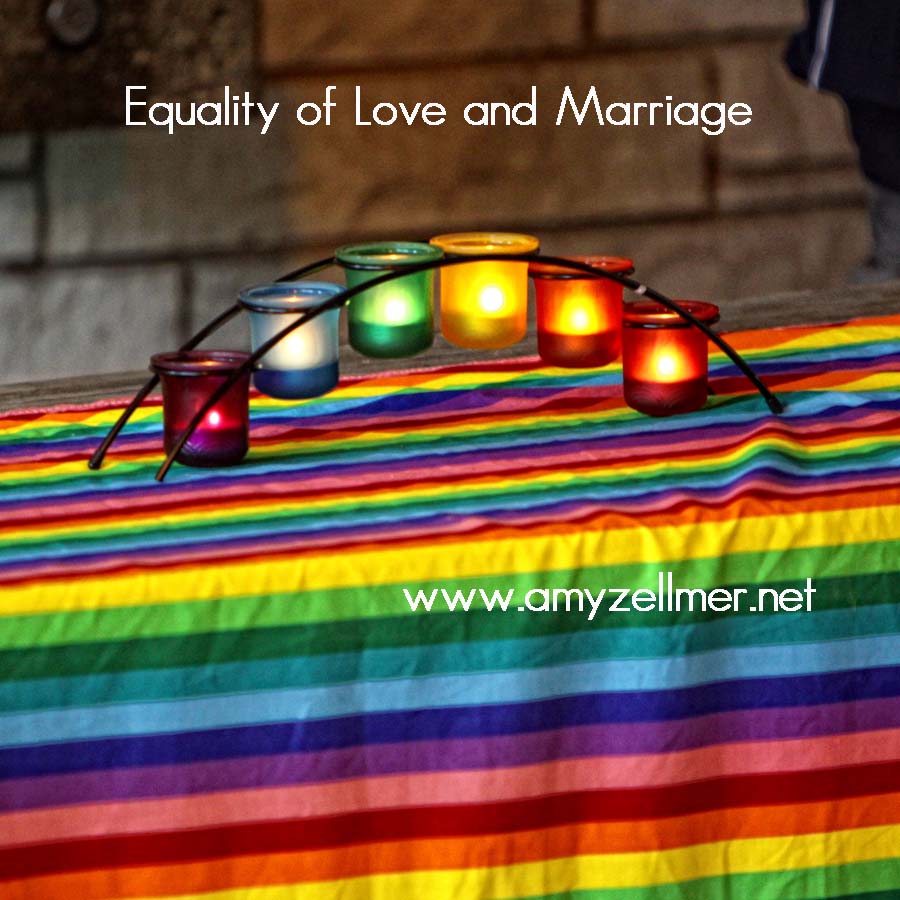 A month or so later I helped Val and Amy with a garage sale at their house. My sister and I sat in her kitchen and talked for quite a while about a whole range of topics, but mostly about her and Amy, her divorce from her husband, and when she knew that she wanted to be with another woman. It felt so good to finally talk about things and really get to know my sister. Given that she is 17 years older than me, she was always more like an aunt to me than a sister and we really never had much of anything in common. Now we were bonding and our relationship was growing.

Later that year I found myself on a first date with my second husband. On the car-ride home from a Halloween party I told him quite bluntly that my sister is a lesbian and her partner is a pastor. I also told him that if he had any problems with that to let me know right away so we didn’t have to bother getting to know each other! Needless to say he wasn’t phased because he is completely accepting of people’s lifestyles (and of course, their RIGHT TO CHOSE how they live). Intolerance is no longer an option in my life!! Even at the end of my second marriage he held true to his testament, he told me that Val and Amy are two of the most amazing people he’s ever met, and they are an inspiration to him.

I have now been through two failed marriages and one broken engagement in fifteen years. Because I live in the straight world I have the “right” to marry and divorce. I have the “right” to all of my pain, suffering, shame, and guilt. Val and Amy have been together in a committed, loving relationship for over 15 years and yet they don’t have the same rights as me. I can not even begin to imagine throwing prejudice and naivety into the mix, which is what they must deal with in addition to their regular everyday relationship struggles.

I am so proud of my sister and the beautiful person that she is both inside and out. I am proud of Amy for choosing to “come out” in the church knowing it meant her love to my sister would be on trial. I am thrilled to announce that they were legally married in Minnesota last August. They had the most beautiful unique wedding bands for women. And I’m even more thrilled that now anyone can marry who they choose in all 50 states!! Way to go Supreme Court!!

Most people think that once you initially create a passive income product, you can upload it to your sales page and watch the sales roll in. Although that’s true to some extent,…