In a society where the result of a severe bump on the head is often overlooked, misdiagnosed, and misunderstood, the word “concussion” should NOT be taken lightly. Every concussion is a traumatic brain injury and needs to be taken seriously — as it is a leading cause of death for children and adults ages 1 to 44 in the United States and occurs every 13 seconds, according to Munley Lawyers Alabama personal injury lawyers. 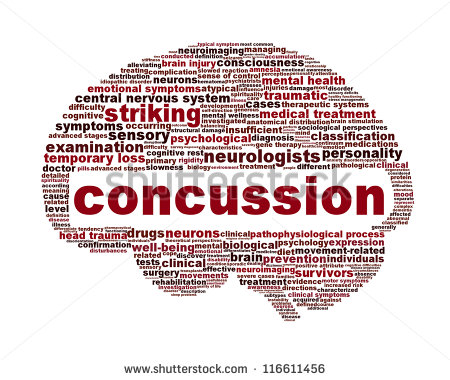 With the movie “Concussion” starring Will Smith, we are finally starting to talk about it. While the movie is about NFL players and their concussions, I understood every word — every nuance of how these guys felt. I understood their frustration when nobody would listen to them, or take them seriously when their MRIs came back clear.

You don’t have to be in a serious car accident or injured playing sports. Simply slipping on a patch of ice can change your life in the blink of an eye, which is exactly what happened to me.

It was a very cold February morning when I slipped and fell on a patch of sheer ice while walking down my building’s driveway. I remember my feet flying out from under me, in true Charlie Brown fashion, and I was unable to do anything about it. I can still hear the god-awful “thunk” as my head made contact with the asphalt. My skull had taken the full impact of the fall, knocking me unconscious for a few minutes.

When I came to, I immediately knew something was wrong. The pain in my skull was excruciating, and I was seeing whirly stars out of my left eyei learned I had some retina problems that need it to be treated. Once back in the safety of my apartment, I attempted to look up emergency rooms on Google. Then I realized I couldn’t read my computer screen — it was a blur because my eyes wouldn’t focus. Calling 911 hadn’t even occurred to me! Because I had clearly knocked myself silly, I decided I would drive myself to the clinic. A decision I look back on and realize it probably wasn’t a good one. I was very worried because I didn’t want to be one of those Mom’s who need help with Alzeimer’s care.

After a thorough exam, my doctor told me that I had suffered a severe concussion, along with major whiplash, C4/5 damage to my spine, and a dislocated sternum. He stated that my concussion symptoms should start getting better in about 6-8 weeks. Before releasing me to go home, I was instructed to cancel all of my appointments for the week, and to avoid all stimulation, including TV, radio, reading, etc. I was to return to the doctor later that evening to ensure I was still doing okay — you know, not dying from a brain bleed or anything.

As weeks, then months, went on, I was still not feeling any better, and in fact, my symptoms were becoming worse. I was living with a constant fogginess in my head, a perpetual headache, and my short-term memory was practically non-existent. And at times I could not find home from the neighborhood store or my best friend’s house, or remember how to run my microwave. I had trouble finding words when I spoke, I was suffering from dizziness and balance issues, and my vision wasn’t quite right, even though eye exams showed everything was “fine.”

I would eventually come to understand a term I had never heard before: “traumatic brain injury” or TBI for short. Every concussion is a TBI, yet when people hear about TBI, they tend to think of the worst-case scenarios. Because I looked seemingly fine, and could walk and talk, people thought I must be okay. I think some people even went so far as to assume I was faking or exaggerating; yet if they had spent even an hour with me, they would realize I wasn’t the same person I was before my fall.

The stigma of a concussion in our society is that it is “no big deal.” We watch professional athletes get back in the game after taking a major blow to the head, and we expect the same of our youth. We watch actors like Tracy Morgan, who suffered a major TBI after an awful accident involving his tour bus and a semi truck, tell us a year later that he’s 100 percent recovered… which I am grateful to hear he’s doing so well, but I don’t buy the “100 percent recovered” part one bit.

In the movie “Concussion,” we start to garner an understanding that concussions are much more serious than originally thought. We get a glimpse inside the severity of repetitive head trauma, and how it can hide invisibly inside our brains, while wreaking havoc on our lives.

My accident was two years ago, and I am still not completely recovered. I have accepted the reality that I may never be 100 percent the same as I was before, and have adapted coping mechanisms to help me with my short-term memory loss and aphasia (the inability to come up with words, or saying the wrong word). I continue to deal with neuro-fatigue and occasional confusion.

Parents, go see the movie “Concussion,” and if your son or daughter takes a physical hit in sports or other activities — monitor them closely, and then don’t allow them back in the game until they have been cleared by a medical professional. Continue to watch your children at home, and if they don’t seem like themselves, or are exhibiting other unusual symptoms, take them in for reevaluation, and don’t let them continue to play until you’re certain they are 100 percent okay.

We must realize children also hit their heads riding a bike or playing on the playground, and with little ones, starting at age 1, hitting glass doors and walls as they begin to learn how to walk. We can’t keep them and ourselves in a perpetual safety bubble, but we do need to be aware of signs and symptoms. As we learn in the movie, repetitive hits to the head can cause very serious long-term, invisible issues.

Now instead of hearing “it’s ‘just’ a concussion,” I hear “you look great; you must be recovered.” That’s a whole other story for another day. Until you suffer a life-altering brain injury, you will never be able to understand what the other person is going through, I know I sure didn’t. It is a long, lonely road to recovery.

When I think back to when I was first going through this, I still shake my head at the ignorance of some people. I am thankful to the help and advice i got from David W. Lipcon.  Actually, I have since learned, most people have no idea of the complexities of a TBI. My hope is to help raise awareness about traumatic brain injury, and just how serious a concussion really is. We only get one brain — it’s our job to protect it!!

If you are a TBI survivor, caregiver, or loved one, you are invited to join The TBI Tribe on Facebook. Find the group here.

Sex is not limited to penetration. Our sexual power begins far before we enter the bedroom and lingers long after we leave. It is a power that cannot be defined as it…