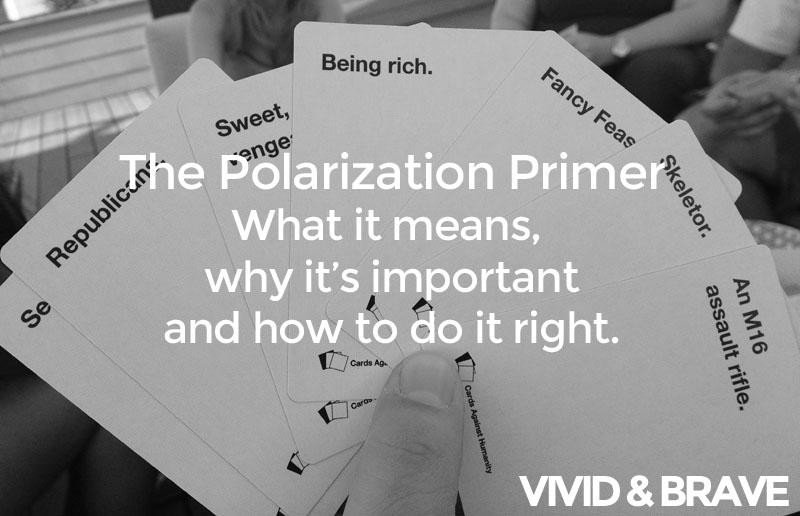 If you ever come to hear Christine and I give a talk, or you join one of our coaching groups, you’ll find that we talk a lot about polarization and why it’s so important when your business is based on drawing people who are like you towards you, while at the same time urging people who won’t be a good fit to work with you away.

Polarizing people is one the most powerful tools you have in your marketing toolbox. So many businesses are simply walking carefully along the middle line, terrified to offend anyone, and so putting out bland, polite messaging that generally makes people smile briefly and then move on. In the same way that there is nothing to repel anyone away from their brand, there is also nothing to draw someone toward it. In a creative business, this can take you further, increasing the number of unqualified leads you get, and the amount of time you spend weeding out people who aren’t a good fit for you.

So, what does it mean to polarize people anyways?

You can probably think of several companies who, over the last few years, have created no small amount of chaos in the social media world. Lululemon, Abercrombie & Fitch, Chick-Fil-A are a few that come to mind for me immediately. Companies who took a position over which kinds of customers they wished to serve and which they didn’t. Polarizing, at its most basic, means to divide people at opposite ends of an often warring spectrum.

From a marketing perspective, one could probably argue they went too far with that, though. Creating that much negative buzz about entire groups of people with spending money in their pockets wasn’t great for business. in small business especially, polarization needs to be done carefully, but when done well will pay off in spades. The people who love you, your tribe, your evangelists, whatever term you want to use will buy anything you want to sell to them. Those people who just really like you are also going to buy a lot of stuff. And the people who aren’t so sure about you will still talk about you. They’ll suggest you to friends who you do fit with, even if you don’t fit well for them.

And even better, when you take up a polarizing position, it gives your clients the permission to be polarizing as well, to live firmly in their beliefs and stand proudly behind what matters to them.

You’re probably wondering how to strike that balance, and so that’s why you’re here! These are a few things to keep in mind when you’re cultivating that unique voice of your brand and putting it out into the world.

This one should probably go without saying, but I’m going to say it anyways. YOU are the secret weaponin your business. The things you love, the things you believe, the funny way you eat toast crust first…. those things are the things that will result in your most effortless polarization. I’ve got tattoos on my arms that I don’t bother covering up very often and I swear like a trucker. If people don’t like tattoos and trucker mouth, they might not want to hire me. And that’s okay! I might not feel comfortable working with them, either. Especially the first time I drop an F bomb and they look mortified. Embracing you – all your quirks, flaws, strengths and weaknesses and infusing them into your marketing will be what pulls people in towards you.

Consistency is key – but that doesn’t mean you have to be a robot. You can have varied interests and those varied interests can even sometimes be disharmonious, however it’s important to ensure that in the things you are most vocal about  – be it a purpose driven cause you’re in love with, or a wish you hold for all people –  you’re consistently presenting the ways you support that belief and not presenting things that might create a disconnect in your client’s mind. If veganism is important to you, don’t Instagram a photo of your steak. People will be confused at the least, and stop trusting you, at the most. We’re -really- good at picking out inconsistencies, and remembering them for a long time.

Be Vocal About What You Believe.

Often, Christine and I will talk to someone who is afraid to speak up about what they believe for fear of offending those people who don’t believe, or can’t practice, the same philosophy. However, stating what is true for you does not automatically negate what is true for others. When Christine started working with real moms who wanted to rediscover their beauty, there was nothing in that statement that said that other women might not need to rediscover their beauty, or that only moms were beautiful.  Her mission was a personal one, and related to her own story of connecting with her own sense of beauty, in the face of a wealth of cultural messaging that said otherwise.

This one really goes hand in hand with the previous tip. When you state your belief, you have to make sure it’s about you. Targeting others as being wrong, broken or bad is a surefire path to the kind of negative attention that we mentioned above. It weakens your position, rather than strengthening it, when you demean the choices or circumstances of other people (even a made up hypothetical person) in order to justify your own beliefs. This is the probably the most important thing to remember, because the strength in polarization often is in the way it can act as a rally cry for people who believe similarly to you.  Jonathan Fields talks about choosing a ‘dictator’ for your revolution. This shouldn’t be a person, but instead a paradigm, institution, or competitor trait that you are rallying against. For me in my work as a maternity birth and newborn photographer, it was the Birth Industrial Complex (my name for a medical system that was denying women the power of choice). For Christine, it’s the beauty magazine industry. If you target specific traits or behaviours of individuals and paint them as negative, you will find yourself arguing for your position more than rallying the people to you who believe the same thing that you do.

I’d love to hear about how polarization is working for you. What have you chosen to stand for in your business?

There is this retreat, called Inspire. A couple hundred photographers bivouac inside a hotel for three days and do a lot of hugging. Learning too. And laughing, sharing, teaching. But the hugs…