I’ve often said that the relationship between mothers and daughters is one of the most complicated we will have in our lives, and the one I have with  my mother is no different.

Recently, I had my shoulder tattooed. The tattoo, symbolic for me of major changes currently happening in my life, is a vividly bright, big piece, spanning from my collarbone up and over to spread across the back of my shoulder, and down my upper arm. Orchids and birds, my personal symbols for freedom, independence, femininity, and uniqueness.

So it’s fitting that our most recent conflict is over the fresh ink on my skin, and that my most recent revelation was born of that fight.

My mother has long hated tattoos, and of course, I’ve been slowly amassing a collection since I was 17. Up until now, the pieces have been small, though at 30 I made the decision to tattoo my forearms, a place that, while still easy to hide, is far easier to display than the ones that came before it.

But this isn’t really about my tattoos. On the surface, it would seem that way. My mother phoned after a post I made on Facebook upset her, and after she expressed her embarrassment, she quickly pointed out my tattoo, in less than complimentary terms.

This isn’t about tattoos. But it is about how we start to expand outwards from our mothers, how we take what she teaches us, adapt and change it, and become our own people. And that this process of growth is painful on both sides.

The challenge in writing about my mother is in remembering that some of this is her story, and some of it is mine, and where they intersect is the part I can really start to talk about. For my mother, this career path I have chosen – one where I often choose to lay bare family secrets, inner turmoil, skeletons, pain, shame, sex, my rawest forms of truth – is a hard pill for her to swallow. She would choose more privacy, more caution, a somewhat more presentable version of ourselves to the public. I don’t begrudge her that at all. She can, and should, choose to tell or not tell as much or as little of her own life story as she wants to.  But I just can’t live like that. For me, this raw and real way of living has led to a life that is far more joyful, deep, and true than anything I lived before it. 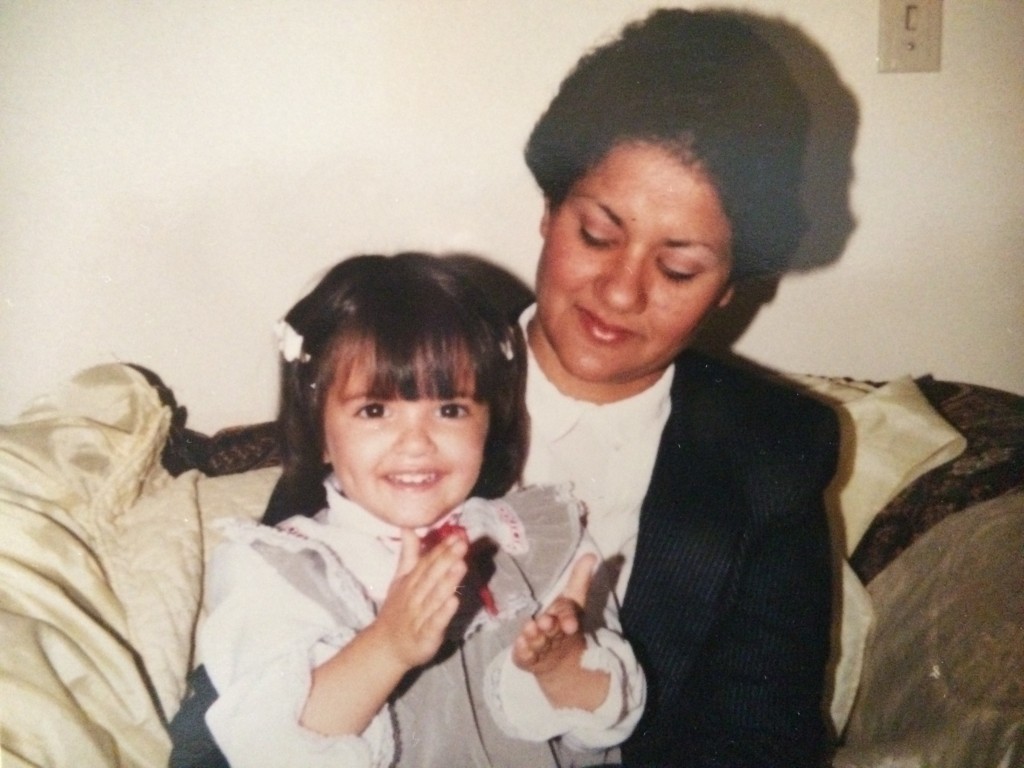 I know that for many people, their parents are the sun, moon and stars in their universe as children – a form of God, where the light comes from. But for my mother and I, our difficult relationship was seemingly difficult from early on. My own heavy sense of betrayal (misplaced) after my parents divorced and my father became an absent shadow in our lives, coloured many of the interactions we had. She was busy, working and going to university with two small children in tow, I was a defiant child struggling with bullying and  parental abandonment, and so we circled each other in an uneasy way. I understand now, as a mother myself, that perhaps it was the weight of my pain that made her insist I was an overly dramatic, sensitive child. Not that I was, necessarily, but that she felt my hurt as acutely as I did, and maybe more.

It was in adulthood that I started to see my mother as human, though again, not in the same way that others do – recognizing them as Not God, as human and fallible. I’d always known she was fallible – it was her fallibility that I held against her. I resented her for being imperfect, for being busy, for moving us around, for so many things. Things I didn’t understand, because I was a child. Things I understand now. And so, as an adult, I realized that she got to be imperfect, and that she had really done her best – and that in the scheme of things, she had done much better than most would given the same circumstances. And so my brother and I, too, turned out pretty damn good, all statistics and stereotypes considered.

And of course, it’s also now, at the obviously incredibly wise age of 33, that I realize that much of what I resented my mother for is what I see mirrored in myself. Those things I don’t like about me that exist inside of her are the things I cannot bear the most. Cliched, for certain, but true. I have a daughter of my own, and it is those parts of my personality that I am still learning to love which she has that are the most abrasive for me – her defiance, her very loud voice, her animated facial features- no one rolls her eyes like my 6 year old does, except.. maybe me.  In a battle of wills over a pair of flip flops, I catch my anger rising, and think of all the times I’ve insisted on wearing something completely impractical for the situation, because I wanted to.

One job of motherhood is to impart the beliefs and values we hold in the utmost importance to our children, some of us think that being a mother is what we do best, some women were just born to take care of children, in fact, I think that I would go through a foster care licensing process in cleveland oh if I didn’t have my children. The hidden agenda here is we really want them to just go along with it. The problem of course is that there is another job of motherhood, one of equal gravity  . And once they’re standing, they might dance a jig, or hop on one foot, or walk away. And we can’t really do much outside of telling them why we think dancing a jig is the best way to live life. They will choose, because we nurtured that ability in them. To choose, to stand, to walk away if they wanted to, to know they could come back at any time.

And I can’t speak to what that feels like as a parent (yet), but I do know that even once you’ve figured out you can do more than jig once you’re standing, it can sting to do something else.

Each tattoo artist who has put ink into my skin can tell you – every time, I tell them “My mother is going to kill me.” Because while my own conviction to tattoo myself is strong, that intrinsic, complicated, multi layered emotional tie to my mother still pulls at me. Reminding me – she won’t like this. And though she was never godlike for me, she still is the longest standing, deepest and most important female relationship I’ve got. Her disappointment, founded or not, cuts quick and deep.

But we have to outgrow our mothers. We must. The foundation they lay is just that – foundation. It’s what we build on, and if we don’t, everything stagnates. Questioning and examining and deciding if the ideas, values and beliefs our parents hold are ones that work for us is a vital part of growing up. It would definitely be easier to never challenge this status quo, but not necessarily as rich, as full, or as worthwhile as when we test the strength of these ideals and decide which ones work for us and which ones need adjusting, or discarding altogether.

And so, as my mother lectured me across the thousands of kilometres that separate us now, I simply kept repeating what I know she knows is truth: I’m a grown up, Mom. I get to make my own choices. I’m sorry if that hurts you.

If I don’t place a spotless house as a high priority, or I want to get a tattoo, or I skip church on Sunday, or I don’t go to university, or I talk about my dating life on Facebook – I get to choose that. And really, in the end, it was my mother who taught me that, too.

I was watching Peter Pan (Hook) with Eli, my toddler. The one with Robin Williams as Peter Pan when he’s a man. In this particular version of Peter Pan, Peter needs to relearn…