Blood does not build a family, love does – and a family is anyone who lives under the blue tarp of your heart.

That is something my father taught me, though I don’t think he even realizes he did. His classroom was a campground; his pupils a blended family of six kids; and the tools of his object lessons were a van, two tents, five blue tarps, one trailer, twelve fishing poles, fourteen lawn chairs, and eight bikes. That was the roll call for our family camping trips. Our campsite was always an eclectic array of toys and tools and trinkets. Every time we set up camp on one of our many trips I would marvel at how the maddening, ram-shackle appearance belied the security and comfort of our temporary dwelling place. 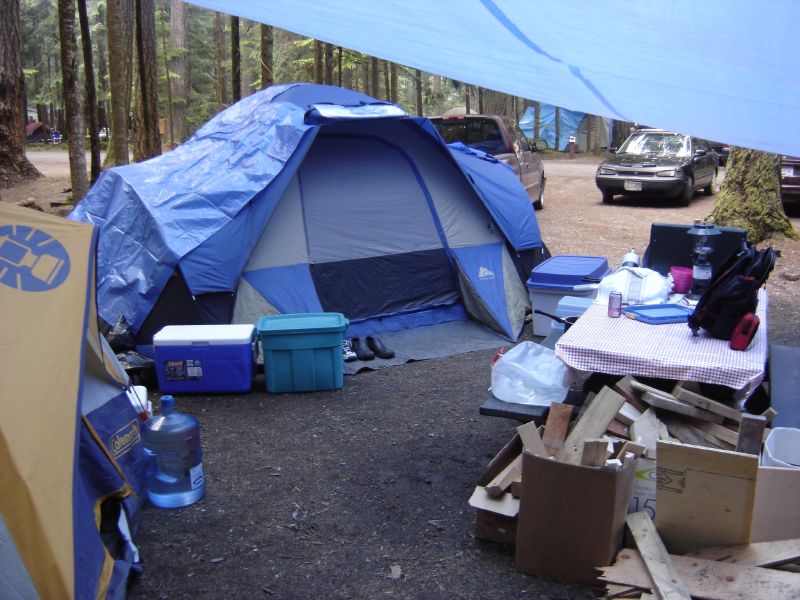 With 6 children and all that raising such a horde entails, my father loved to escape from the busy schedules and take us camping whenever he could. The first thing my father would do when we arrived was to cover our entire two camping stalls with a highly sophisticated system interwoven blue tarps. This would act as a shelter from sun and rain, and years later I came to understand, a symbol for our family. These were our stalls and this was our place. And how I loved the blue-tinged world of those camp sites. For within that shelter we laughed, we cried, we sang, we played and we worked together – as a family.

You see my family was special, we were different, and somehow in life we always felt that. We were “mixed” as some people called it. We were like television’s Brady Bunch, but with a lot less glitz and a lot more grit. My mother had three daughters and an adopted son, and my father two boys. When they married we became known as the Hamer Bunch, but our joining was not always as sweet and cordial, nor life as easy as the Brady’s portrayed it to be. We fought each other at first- we fought over what belonged to whom and which parent really belonged to whom. Those days were short-lived though, because our family faced bigger challenges – the ones from the outside. And we learned to stop fighting each other and start fighting for each other.

We were each different and none of us resembled the others in a really conclusive manner. In fact, our skin tones were not even all the same. We were teased and taunted for it, but we learned to defend each other with the ferocity of a family the likes of which I have never seen since. And when we took those camping trips, away from the glaring eyes of the world, we were just a family, with nothing to defend. We were just a family sleeping under a big blue tarp.

Blood does not build a family – love does. And that is what I learned while sleeping under that blue tarp. Every time my father carefully hung that tarp over his little band of grubby children, he was making a statement. He was proudly saying to the world, “This tarp covers my family unit and it provides shelter and warmth and nourishment to the ones that I love.” Looking back now I can see how that simple act of providing us with shelter was symbolic of something so much more.

Growing up I resented my father at times because I saw him to be resolute and unchanging. He was unwavering in so many areas. He had these funny sayings that he would drill into our heads that at the time made no sense at all. “Everything has a place and everything in it’s place.”, “If the dog hadn’t stopped to do it’s business he would have caught the rabbit”, and “No man is an island unto himself.” But looking back now, I see that what he was trying to build was a family out of eight different lives, and two different homes. I have heard him state so many times, with such conviction, “This is our family.”

The world defines family as matching DNA or common ancestry, but I define family very different because my father taught me a better definition. It is not flesh and blood that makes my brother my brother – but love. I have two blood sisters, but I have no brothers with whom I share DNA. However, I have three brothers who sat with me under a blue tarp and together we learned from my father what being a family means. I have three heart brothers – three boys who have turned into men for whom I would fight for and defend at my own peril, and if that’s not the definition of family, I do not know what is.

Now when I camp, the first thing I do when we arrive is cover my family unit with a blue tarp and gather them together to teach them that blood does not build a family, love does – because my father taught me so.

I woke up with a heavy feeling of despair in the pit of my stomach. My soul felt completely deflated. It was a day like any other day: a day where my…