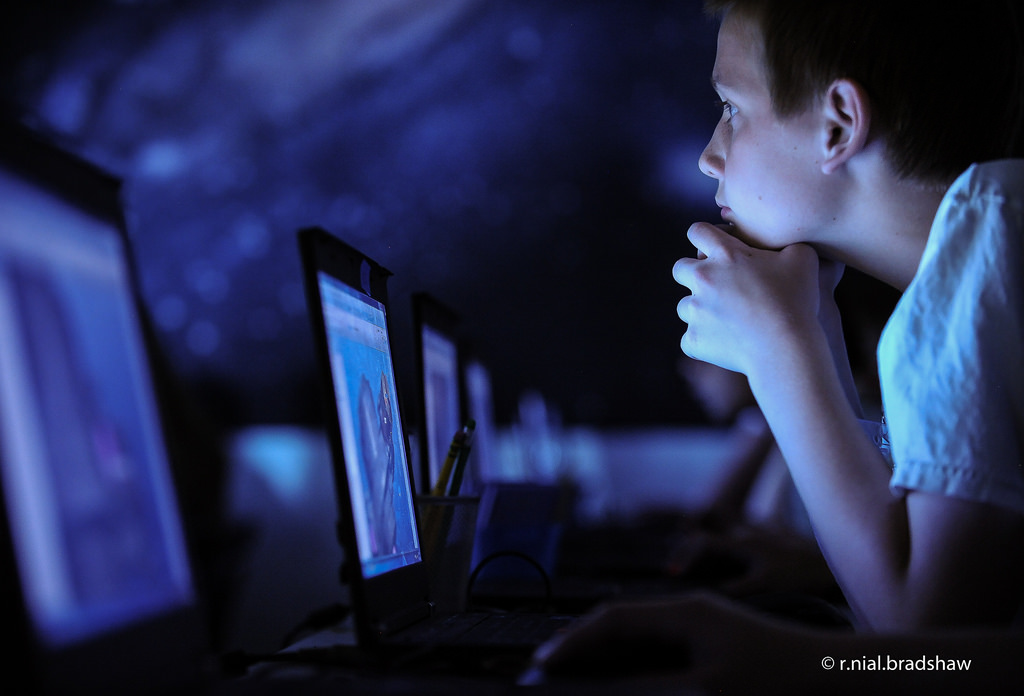 Looking back on one of my articles from last month, I can’t help but notice a trend, Mom guilt. It’s almost like we don’t even realize she’s sneaking up on us because she’s just the norm now. Part of that article talks about the guilt of letting your kids entertain themselves with technology. Raise your hand if you are guilty(and feel guilty for doing so)! This brings up a controversial question. “At what point do we accept we are living in an over-digitalized world?” For real though, let’s talk about this.

We are so down on ourselves for letting our kids play their tablets, or watch TV or use the X-Box. But we still do it. And I think I might be the first to say that’s ok! Think back to when personal record players came out. How many kids locked themselves away in their rooms and listened to music for hours on end? Or VCR’s. Sitting in front of the TV all weekend watching movies? I myself remember spending a lot of my teen years laying on my bed watching TV. A lot of TV. My brain is so full of useless information, my mom is convinced one day I will put it to good use on Jeopardy.
What this comes down to, is we have to find a happy medium. We can’t constantly think we are horrible parents for allowing the inevitable. Thinking long and hard on the topic, I tried to find the positive. It didn’t take me long to remember my husbands story of how he started his previous job as a computer programmer.

His first job in the military was a com/nav worker on B-52 bombers. A pretty badass job. He appreciated it for what it was worth, but he was definitely not mechanically inclined. About 3 years in a job opportunity came up for a computer programming position. He took a chance and applied. What he was not aware of at the time, was this application came with a test. He took the test and crossed his fingers. About a month later he received a phone call that the commander running that squadron wanted to interview him. He thought nothing of it but was then told “They never do this”. He became a little bit nervous. He walked into the room, introduced himself and the commander asked him one question. “How did you do this?” Confused, my husband asked him to clarify. “Every applicant considered has a degree in computer science or has done this job previously. You have no degree and no experience, yet you scored higher than they did.” His answer was simple, “This is what I do in my spare time.” Bam! Hired on the spot. They knew if this is what he does for fun, imagine the possibilities with formal training.

Granted all of this did not help my argument of limiting computer time in lieu of a date night.

This is a prime example of something we deem destructive turning into our livelihood. Think about the kid obsessed with Minecraft right now, probably building skills in geometry or creative thinking. The kid who comes home and drops everything he’s doing to play Angry Birds, but in reality he’s learning strategy.

I’m not saying that we should throw playing outside and with friends out the window, but I think we should start going easy on ourselves. This is the new norm. And in moderation it’s not that bad. My kids still play baseball, are involved in cub scouts and love to sit and read books. So a few hours on their electronics are not going to turn their brains to mush and make them lazy. And a few hours of silence can produce endless possibilities for a work-from-home mommy!

Ronni is a lifestyle photographer, proud Air Force wife and mom of three. When you can't find her at Target, you can spot her at Dunkin Donuts or Ikea. Her passions have never included long walks on the beach, but hiking volcanic ridgelines instead. Recently moving from Hawaii to Maryland, she is concentrating on rocking her business and trying to get her Hawaiian born daughter to wear shoes in the winter.

Ronni is a lifestyle photographer, proud Air Force wife and mom of three. When you can't find her at Target, you can spot her at Dunkin Donuts or Ikea. Her passions have never included long walks on the beach, but hiking volcanic ridgelines instead. Recently moving from Hawaii to Maryland, she is concentrating on rocking her business and trying to get her Hawaiian born daughter to wear shoes in the winter.

I’m not even going to try to hide the fact that I am a HUGE Taylor Swift fan. It doesn’t matter if you love her or wish she’d shake it right off…