Self-worth is so overrated. Or so I thought.

For the longest time, I had been living in a world of constant emotional turmoil. I was always either frustrated or angry, and I was good at hiding it. Sometimes I even fooled myself. Then one day, bam! A mental break down hit me full strength. I literally lost my mind. Bright red flashed across my eyes. I freaked right out, and then shut down all over something said in a group on Facebook.

I have been in and out of Facebook groups for 6 years. First was for companionship when my daughter was born. It helped get me out of the house, and remain a productive citizen, even while I suffered in silence with  postpartum depression. Thankfully, my husband and I were able to see the signs, and I was able to get the help that I needed. I was cured.

In 2010, I thought it would be an awesome idea to open a business. I could bring my daughter with me, I could build my dream and everything would be fabulous. Well, after a rocky two years, we were forced to decide to close. The time and stress to keep open a struggling retail space was exhausting. The hardest part was shutting the doors without having a new tenant in the space – we had to pay rent on an empty unit for six months. Once the new tenant was in, everything was great. We were done with the place, and we were happier and better off. We were free.

A friend approached me in the summer of 2013 to see if I wanted to help admin a mom’s support group on Facebook. I thought great, this will be easy. Meet new friends, go to play groups. Perfect! Needless to say, a year and a half later, it was not easy. Looking back on it now, the signs were all there. I was desperate to fill the gap my failed business had left. I took on everything and anything I could. I would jump from idea to idea, project to project, trying to fill a void. I couldn’t understand why I needed to fill something, but that didn’t matter. I just kept at it, and everything kept failing. I wasn’t good enough.

I had been doubting who I was as a person ever since my business failed. Maybe even before. I thought of myself as a failure. I had absolutely no self-worth. I was worthless. A black hole. I looked around for everything, anything, to give me the worth I desperately needed. I tried to fix people who I perceived as broken. In a large group of women, there was always someone down on their luck, or having marital issues. “I’ll fix them, they will get better.” No matter what I said, they never took my advice. Nothing I said meant anything. I failed again, and this time I took it personally. How dare they complain and then do nothing about it! I was drowning in my own frustrations and in turn, was so angry at them.

My three year old son was becoming very difficult to handle. We would butt heads all the time. He wouldn’t listen. He would throw incredible fits. 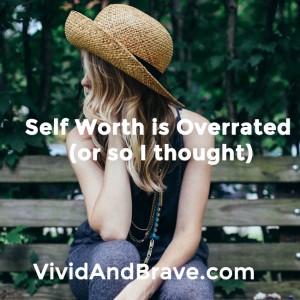 Scream and cry. He pretty much did what I wanted to do. He fed off me. He tuned into my feelings of desperation and sorrow and ran with them. My poor man. I couldn’t figure out what I was doing that was so wrong. Fail.

I went back to school to upgrade a high school class so I could get into a program that I thought I wanted. An assignment came up and I freaked out. My thoughts spun out of control. I couldn’t do this. I had no idea what I was doing. I was  just not smart enough for this. Fail. Again.

I finally had a break through with the help of some amazing and brilliant friends. I was trying to find my worth through career, school or volunteering. When it didn’t come, I moved on to something new. Something better. Except it wasn’t better. I was triggered by so many things, and living in a bubble of frustration became the new normal. But it wasn’t normal. It wasn’t living. I wanted to be a part of something so badly, that I forced myself into groups just to feel special and important. If others liked me, then maybe I could like myself. I had to leave those groups. I am better for it.

I am now walking around with a new sense of self. I am happier and less frustrated. My son is also less frustrated (as he is me in every aspect). I know my triggers and I am working with them, not against them. I have a journal I will write in. I will find my self-worth by learning who I am. I, for the first time in my life, have no idea what I am going to do next. I have nothing set up. At all. I have always had something on the go, something I thought I wanted to do. Rush, rush, rush. I have forced myself to slow down and breath. Who am I? Where am I going? Honestly I have no clue. I am 36 and I have no direction. It feels awesome! And it is scary. That’s okay. I am freeing myself from the burden of trying to fix others. I will now only be concentrating on building myself up. I am happy, and getting happier as time goes on. I am worth it.

And so I know!

People often remark to me that I have an exciting life. While I don’t have a lot of mystery or intrigue in my life (and for that I am thankful), I do…