For the last few days, the Internet has been abuzz with excitement over the news that Ashley Graham,  a plus sized model, would be appearing in Sports Illustrated. Speculation about her dress size followed, and of course, a vocal chorus of people who were disappointed overall with the beauty standard established by the media, where a fairly average sized body is considered plus sized, chimed in.  Then, it was revealed that she wasn’t actually going to be in the editorial part of the magazine just an ad, but it’s okay, because size 12 “plus sized” model Robyn Lawley would be in the actual editorial spread.

And people exclaimed about the progress we were making. Amazing, right? A size 12 is still a long way from the size 0 body of the average model.

It’s also still smaller than the average American woman, who wears a size 14.

And I have to be honest. I’m pissed off. As a genuinely plus sized woman (a Canadian size 16-18), neither of these women comes anywhere close to representing me, or most other plus sized women. Ashley Graham has even lashed out at Hollywood for holding up Jennifer Lawrence as an example of curviness. And yet, she herself has a body that doesn’t accurately represent most plus sized bodies in North America.

I couldn’t put my finger on why it felt like backwards progress, instead of forward motion, until I had to chance to talk more with Christine about it (who wrote her own piece on the subject on her blog). 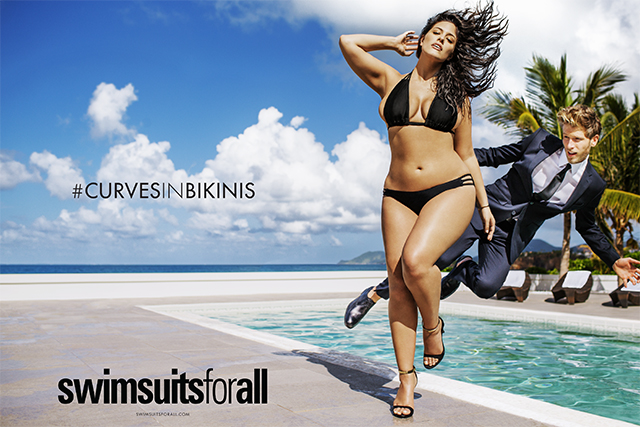 Model bodies of all sizes have no lumps or bumps. Ashley and Robyn and Kate Upton (another icon of curviness), are all shown to have flat stomachs, perfectly smooth thighs, and not a single extra chin in sight. I realized that I myself have grown considerably biased to this depiction – Tess Holliday,  recently signed by Milk, has the lumps and bumps that closely resemble my own – and I found the visual unappealing. We haven’t just been conditioned to appreciating small bodies. We’ve been conditioned to accept that a body is only beautiful if it is without imperfection – flat, and smooth is the goal.

I know this all too well because, like pretty much every other woman in existence, no matter her size, I dress to ensure that nothing unsavoury is bulging out somewhere. God forbid someone be exposed to my lower belly fat, even through a layer of denim. Heaven help us all if they see the way the fat at the top of my thighs dips in and then pops back out around the lines of my underwear. A muffin top is a giant social faux pas, nearly on par with wearing leggings without adequately ensuring your ass is covered – but mostly only if that ass is a little dimply with cellulite, or your thighs are thick. The constant barrage of input insists that we ensure no one ever has to be assaulted by the view of our fat. Plus sized clothing is often designed to act more like a tarp than to flatter or fit properly, accentuating the often beautiful curves of a plus sized figure.

The problem is – nearly every single body type has fat on it, somewhere. Fat that appears when we bend at the waist, or turn to look over our shoulders. Bulges that are created by too tight bra straps, or pants that hit at the wrong place. It’s not the exclusive domain of the overweight, but rather the reality of most women. For me, progress would look more like models of all sizes with these imperfections not being photoshopped out of existence. Progress would look like more models like Tess Holliday, and not size 12 women with flat abs being held up as plus sized. A quick tour of the Curve section of Milk, the agency which signed Tess, proves that we’re still a long, long way from that reality. It also proves that the fuss being made over Ashley and Robyn is some kind of media red herring – a triumphant proclamation of how inclusive they are being – when it’s clear that they have a large number of “plus sized” models in their roster, models who are working, getting booked, but almost exclusively for shoots that cater to a plus sized market. Confused? So am I. If the message is that we’re going to start seeing “plus sized” women in modeling, to present a more accurate picture of womanhood, why are they mostly modeling for these type of projects?

The underlying message remains: fat doesn’t get to come to the real party. We’re having a side party for you over here.

The message for our girls – girls with average bodies, girls with perfectly healthy, fit bodies, is that they are fat. And while I understand the desire to see a size 12 or 14 model as proof that even plus sized bodies are beautiful, these bodies aren’t plus sized. They’re average. The dialogue is still all wrong. They’re still feeding us a lie, it’s just a new version. This one is perhaps even more insidious than the size 0 models, because this one is out to convince us that average is fat. We have been getting smarter at how we consume media, able to understand that between Photoshop and a body size that is only possessed by a teeny fraction of the population, we’re being set up for failure by an impossibly high standard that even the models themselves can’t achieve without help. I have long since accepted that there will never be a size 0 anything in my closet, but a size 12 or 14? Maybe. 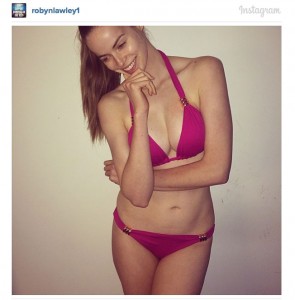 It’s probably notable, too, that Robyn Lawley herself says she doesn’t consider herself a plus sized model. Just a woman, with an average sized body. It’s that kind of awareness we need more of.

My inspiration for photography came to me on a Wednesday in Venice Beach. Inspiration is a funny thing—it happens whenever it wants, without any possible warning at all. Suddenly, it’s just there…