It had some crazy high points, but the common thread in my personal life was akin to being put in a dryer with a bunch of loose rocks.

The hits started on Monday and I wondered if they’d ever stop. Someone hurt me intentionally, taking action against me that was intended to wound, and it did. It probably hurt more knowing it was on purpose, and even with his apologies and regret, I couldn’t help but carry it around like a weight. The person in question said he did it so I’d feel as hurt as he did. I understood this, intellectually – hurt people hurt people. And sometimes, when you’re handed the ability to hurt someone who has hurt you, the desire is overwhelming. Even in knowing better, he did it anyways. Regret came a little too late. However, I was determined to give grace, and to forgive him, because it felt like the only way I had to free myself of that sense of being stabbed.

So I did. As Christine urged me that night “Be love for him.” And so I didn’t strike back, and I didn’t turn away. I stood in the hurt and the ugliness and willed it to be over so we could salvage our friendship.

And a few days later, he did it again. He accused me through a friend of something so malicious, something I hadn’t done – I was standing in the hurt and ugly, remember? I was being love. And man, that hurt almost more than the first part. I puffed up in my injustice – I HAD been forgiving and gracious in the face of his hurtfulness, and he had thanked me by telling people I hadn’t? How could he? Hurt people hurt people, and they recruit others into their army. And then it happened.

The friend who had told me of what had happened – who had been told that it was either me or my friends who had sent a vile text message  – became another bit of collateral damage. I let all that hurt spill over and onto her. This friend, who I’ve known and adored for years, laughing, loving and tears, the whole spectrum of friendships between women,  got the full brunt of my hurt. Later, I’d call it “burning all the bridges” mode. I was setting fire to all of it. I needed someone else to hurt and so I dug in and threw insults and was generally not the person I want to be. And she, in turn, was cold and distant and hurtful to another friend of ours who reached out in the aftermath.

If you’re starting to feel like you need a chart, that’s exactly what I think about when I think about how hurt people hurt people. You know those little stick figure graphs that show how an STI spreads? That’s what I see. One person hurts another who hurts two people more who each hurt their own person and it just keeps going like that until someone stands in the way. It is never as simple as just the first hurt, or the second, unless we actively work to put a stop to it. 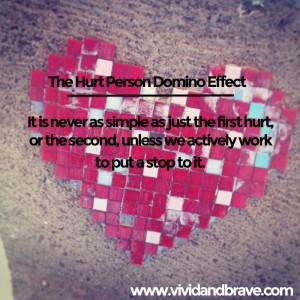 So, after Bridge Burning 2014 was over, I cried. I journaled. And I realized I had to do it again. Stand in the hurt and ugliness, until I saw it through. It didn’t heal anything to push it outwards onto others – in fact, it made it worse. Now I was down two friends, and who knew how many more were headed out after hearing about the words that had spilled out of my mouth. In going for the kill, I’d aimed for a full out massacre.  And I guess because I’d made that choice – to feel the hurt without trying to duck, to not hurt someone else, it opened me up for the ability to hear out my friend when she circled back to talk to me again. To my surprise, she wanted to apologize to  me, when it was me who really needed forgiveness.  She felt like she’d hit a breaking point and spilled over onto me. Apparently, we’d collided at just the right time for maximum damage. And it took her courage and grace to return and try to fix it.  I’m glad she did, because good women friends are hard to come by.

I’m also glad she did, because it reminded me of what I need to remember in dealing with the original friend who set this all off. He’s hurt. And I get it – hurt people hurt people. Sometimes intentionally. And it’s not an excuse for bad behaviour. Not at all. Don’t get me wrong. Being hurtful to ease your own hurt is a shitty thing to do. We just don’t have to keep perpetuating it. Just because someone tips us over doesn’t mean we have to land on the person closest to us and tip them over too. We can decide to just stand in it, and feel it. It takes the edge off of it. It disarms the person who continues to hurt us. And frankly, it feels way better. The little knife jabs and rock throwing is still going on, and it will eventually stop. The more I let that hurt flow through me and out onto the others, the longer it will last.

I read more. I write more. I create a mantra for the person who is hurting me – something along the lines of “He’s doing the best he can.”  or “He’s hurting.”  It helps  me to try to be as compassionate to the person and their struggle as possible. And probably the most important part of it – is that I set good, strong boundaries for myself.  If  my friend contacts me now to try to take a fresh stab, I know I’ll simply wish him well and not engage the conversation. If a message comes through someone else, I’ll let them know I don’t want to hear about it, and change the subject. I won’t seek out new ways to be hurt, either – no Facebook stalking, or asking around. Note that my boundaries aren’t about the aggressor, but about me. I can’t change what he’ll do, so I will change how I react.

How do you interrupt the hurt person domino effect? What boundaries have you set, or do you need to set for yourself?

Every summer I have made a Summer Bucket List for my son. It’s full of activities to check off by the end of summer. There’s all sorts of activities for fun, travel,…