Last weekend, my daughter stated, in her five year old, matter of fact way. “And Mom, your dad is dead.” 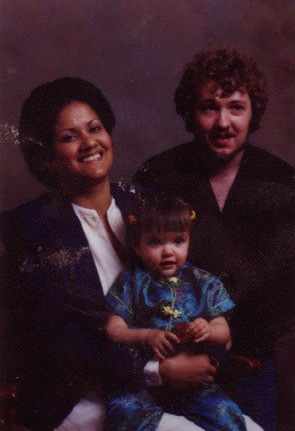 I suppose in her head, that’s the only way to make sense of it. His absence. That in the web that is her family tree, there is a notable emptiness, in the form of my father. Where is he? Who is he? For her, he must be dead. How else to explain it? Surely, if he was alive he would be here. I explain it carefully, that he is alive. I omit that I’m not even sure on that point. I leave out the fact that sometimes dads just don’t stay. I tell her his name, the one I occasionally put  into the Facebook search bar, to see if he has an account. To try to reconnect something that disconnected so long ago. I don’t mention that I think her much lighter than mine hair and fair complexion came from him.

It’s been six years since I saw him. We had breakfast, with my ex husband, and my oldest. I was heavily pregnant with my daughter. It was around this time of year, though maybe May, or maybe July. Regardless, it was like all the meetings before it, and I guess, like any we may have in the future. I revert back to the hopeful kid who wished for her dad to be around, and he laughs and makes jokes and never once makes any promises, which is good. This way he won’t break them.

My parents got divorced when I was 5. Memories of my father before that are viewed through the adoring eyes of a little girl, for whom her father can do no wrong. I remember watching cartoons with him on Saturday mornings, visiting his office, how his du Maurier cigarettes smelled just before he lit them. He called Kraft Dinner “skitter food” and McDonald’s “Rotten Ronnie’s”. These memories are little snippets, and there are hundreds of them. The cherry of his cigarette in the dark in the middle of the night in bed, the day at the mall that I turned and wrapped my arms around a strange man who I thought was him, and how he laughed. His motorcycle. The voices he could do, silly impressions that made me giggle. For years, I searched the faces of the driver of every single Purolator Courier truck that passed me. I can’t even tell you if that was his job at that company, but it was what I had. All of this adds up to some incomplete picture of my dad that I carried with me for years. He would appear and disappear and reappear, long absences punctuated by brief visits that read like a promise to me, every single time.

In my teens and early 20s, he was a traveling salesman on the tradeshow circuit. That’s most often where I’d find him again – working a tradeshow floor at the Calgary Stampede, or the agriculture show. I learned to look for him in these places. It was my job – to seek and find him. He’d be too busy for more than a few minutes of talking, for more than a hug. Once in a while he would be in town a few days past the show, and we’d arrange a meeting, dinner, coffee, a visit. He met my son on a tradeshow floor. He has never met my daughter.

In adulthood, I started to find more pieces of the puzzle. His family history and the factors that contributed to create a man who had never really learned how to be a Dad. Grandparents I never met, my grandmother passing away when I was an infant, and my grandfather a mystery to me, though my name was added to his obituary, some kind of hollow tribute to grandchildren he’d never sought to know. An entire branch of my family tree is estranged from me, and I learned from that, too. These are people who have no problem with letting go, who use love and relationships as weapons. I’ve been outcast since I was 19. It’s weird to read that in black and white but there it is. I descended from  dysfunction, and so did my dad. So I struggle to fault him, this absence. No one ever really showed him how to do better.

And so we come to Father’s Day. My Facebook feed is full of my friends and their dads. Full of love and adoration. For those of us with living, but disappeared, dads, how do we navigate this day? I have to be honest and say that once one year turned into two turned into six, I stopped thinking about him all that often. Except on days like this, my dad increasingly feels like part of my history, and not part of my present. I don’t know anything about him. Where he lives. If he ever remarried. And he doesn’t know anything about me. That I got divorced. That Vivid & Brave exists. It’s odd, being a stranger to someone who shares half of your DNA. I still catch myself every once in awhile, searching faces, searching for him. Wondering if he does the same. My brother and I have become a pair of pretty amazing adults, and he had no hand in it. I wonder if that hurts him to know, or if he’s glad, or if he chose to be absent to save us from the history he carried inside of him. Maybe it was the only way he knew to put an end to the dysfunction.

I long to tie this all up into a neat bow: some kind of sage lesson about love and forgiveness and mistakes and that we are not always destined to repeat the histories our families give us to retell. But I can’t. I’m still in the process of the journey, new lessons crop up all the time. Perhaps that’s the lesson  – that sometimes, these mysteries of love and loss can’t be summed up in neat sentences, that they stay messy and incomprehensible and hard to understand for our lifetimes. That there’s no reason or logic in a parent who decides it’s easier to sever the bonds than it is to uphold them. That it just is, and there may never be an answer to why. So I’ll carry on. Answering my children’s questions. Wondering if he’s alright. Knowing he loved me the only way he knew how.

Scandals. Every industry has them. Controversial advice, tools that don’t work properly, people selling education who don’t have businesses to back them up. They create occasional uproars – Twitter wars, Facebook threads…